When I started the bathroom project there was a lot of reason to move quickly: the bathroom wouldn't be usable while I was working on it, and the back bedroom was full of construction stuff. Once I got to the stage where the only thing left to do was plaster and paint the hallway, however, it was less of a priority. So we spent May-November with unfinished walls.

Since we were going to paint them at some point, one afternoon I thought it would be fun to draw on them with the kids. We got out the markers and drew lots of different things. I emphasized that it was only these walls we could draw on, which is the kind of rule the kids do well with. 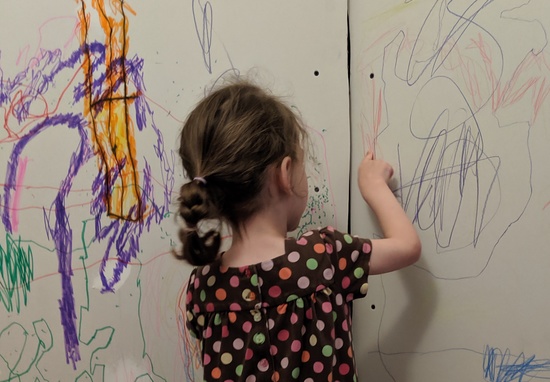 A couple days later they drew on the walls again, but this time with crayon. Crayon, being wax-based, is not a good layer to have under paint. I hadn't thought to tell them not to use them, and they didn't have a way to know, but I was annoyed at myself. I got most of it off with hot water and a cloth, and then when it came to do the plastering I put a skim coat over it.

Later on a friend wanted help preparing for a coding interview, so we used the wall as a whiteboard: 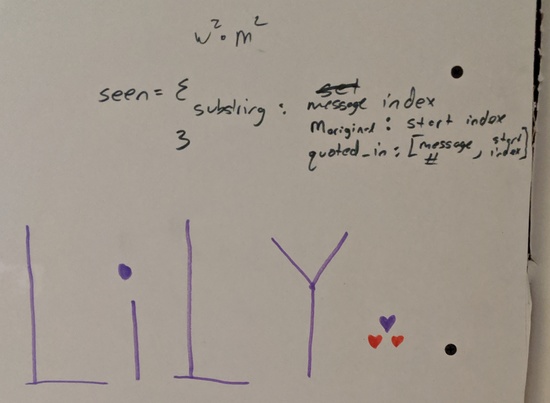 One thing I hadn't considered was that you need more primer over dark marker than plain drywall. As with "no crayon under paint" this seems like it should have been obvious, and something I should have thought about before letting them draw on a large area of the wall, but it wasn't and I didn't, so Julia ended up spending longer painting and priming than we'd been thinking.

And then, the evening after all that painting, Anna took a marker over to the nice new clean white wall and started drawing. We hadn't told her that the wall was no longer ok for drawing, and at 3y "now that the wall is painted drawing isn't ok" is not the sort of thing I should be expecting her to know on her own. Luckily the marker was washable, so it wasn't too bad.

Overall this was more work than I was expecting, and probably wasn't worth it for the fun, at least not the way we did it. If I did it again I'd make sure they didn't use crayon, and either give them light colored markers or pick a smaller section of the wall for them to play with.