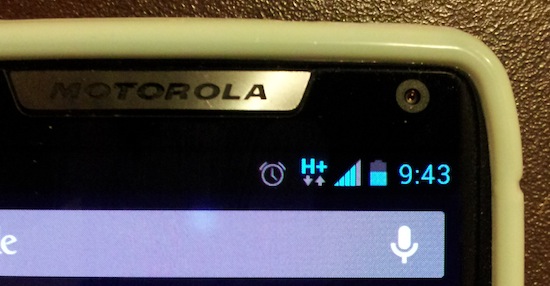 The Verizon Razr M refuses to work on T-Mobile or ATT. You can flash its modem with the Australian radio image, but because that's not a perfect fit you're limited to Edge speeds. It would be nice to simply tell the phone to accept non-Verizon networks, but of course Verizon doesn't document how to do this. It turns out that the way to do this is to change a bit in the phone's non-volatile RAM from 1 to 0. Presumably this bit is the setting for "only work on Verizon in the US". The specific NV item is 8322, and it needs to change from 01 to 00.

Someone figured this out in January and someone else posted a tutorial but I wasn't able to get through it. More recently someone posted a simpler tutorial, and today I found some time to try it.

Because I was running the Australian radio image I first needed to flash the phone back to the US version. Unfortunately all the NON-HLOS.bin links for the original version have dropped off the internet, but I found a copy of VZW_XT907_4.1.1-9.8.1Q-27-2-4_1FF.xml.zip and was able to extract the image. So other people can save the time, here's the US radio image for the Razr M. The Australian NON-HLOS.bin is 104857600 bytes while the US one is 49455104, so they should be easy to tell apart. I followed the same process I did before to flash the phone's modem, just with the new image.

I borrowed a laptop running windows 7, installed the Motorola USB drivers, and followed the instructions. Despite following them very carefully it didn't work: I rebooted the phone, still no cell service, NV item 8322 still reads 01. After trying about four times, however, it finally took, and now the phone gets HSPA+ speeds on ATT (and presumably T-Mobile in refarmed areas)

Update 2013-07-21: After installing an over-the-air update the phone went back to "emergency calls only". Looking on the forum this hack looked like it would still work, and it did!