I spend most of my day standing in front of my work desktop, doing some combination of programming, code review, documentation, and email. Over the years I've figured out a relatively productive setup:

(This is divided over two monitors, with the browser and the first vertical terminal on the left-hand monitor.)

I spent an embarrassingly long time having to hand-configure this each time I had to restart my computer, and avoiding restarting as much as possible to keep from having to do this, so I eventually learned how to use -geometry arguments to set this up:

I also used to manually adjust the settings on xterms each time I started them up, but then I learned how to use xrdb. I put xrdb -l ~/.Xdefaults in my .xsession, which contains:

I also have pretty strong preferences about how fonts should look. Specifically, unless I'm in a hidpi environment, I don't want the modern thing where you use a vector-graphics based (true type) font and then through some combination of hinting and antialiasing you fit it to the screen. Instead I want precisely pixel-aligned bitmap fonts, which happens to be exactly what xterm uses by default. 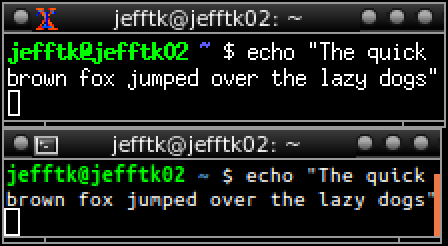 The gnome-terminal rendering isn't terrible, especially when you're at a normal zoom level, but it's much less crisp than the xterm rendering.

(This is one of the things that makes ssh-from-a-browsers annoying: I don't believe there's any way to get text to render device-pixel-perfect, so until hidpi displays are everywhere you can't get away from the blurry fonts there. This is much less of an issue for ordinary web text than terminal text, because I run my terminals at a much smaller font size to get as much as possible on the screen at once.)