I do most of my coding, writing, etc on the command line, so: some views on terminals.

I like having lots of terminals side-by-side, to see many different things simultaneously. Most places I've worked have kept code to 80 columns, with two-space indentation, which is a good fit for my approach. Here's how I usually have my terminals set up: 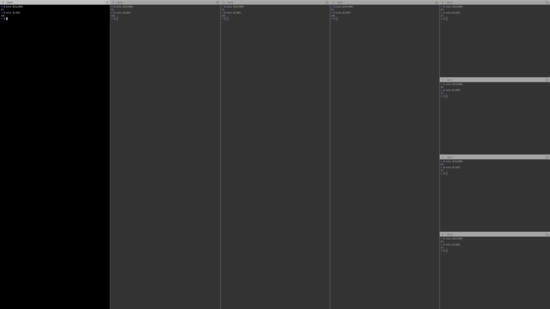 The monitor is 27", at 2560x1440 ("QHD"). This has room for five 83x101 terminals, though I usually divide my rightmost terminal vertically for long-running commands or interactive prompts.

On traditional resolution (non-retina) displays, I have a strong preference for bitmap fonts without antialiasing. They are much clearer at a given size, which allows fitting much more text on a screen. In iterm2 this means selecting Monaco Regular at 10pt, and leaving the "antialiased" box unchecked, under Profiles > Text.

At some point I could see moving to a higher resolution display, but probably not until 5K monitors (my current resolution, but 4x the pixels) are widely available and reasonably cheap. High resolution displays are a bit nicer, but I don't mind the regular kind.

Aside from moving from Linux to Mac, and getting wider monitors, this is a setup I've had for a long time.