When Lily was about six months old I posted about blocking out the light in our room so that she would keep a later schedule. In that post I talked about taping up tinfoil, but the problem with this is that there's no way to let in natural light if you want to. This isn't a problem for me: I like to have the bedroom just be a sleeping space, but Julia likes to use the bedroom to work, read, and hang out, and having only artificial light isn't very nice. So we needed to switch to a removable system.

The tricky part with this is that if you really want it to work you need the kid not to be able to tell that it's getting light outside at all, with day and night being equally dark. So it's not enough to just hang regular blackout curtains, because they'll still get their day/night visual cues and wake up earlier and earlier as the sun comes up earlier. What we found worked well was to have one blackout curtain attached to the inside of the window frame with velcro, and then another one hanging over the front.

For the first curtain, run hook-side velcro around the inside of the frame, attaching it with small screws: 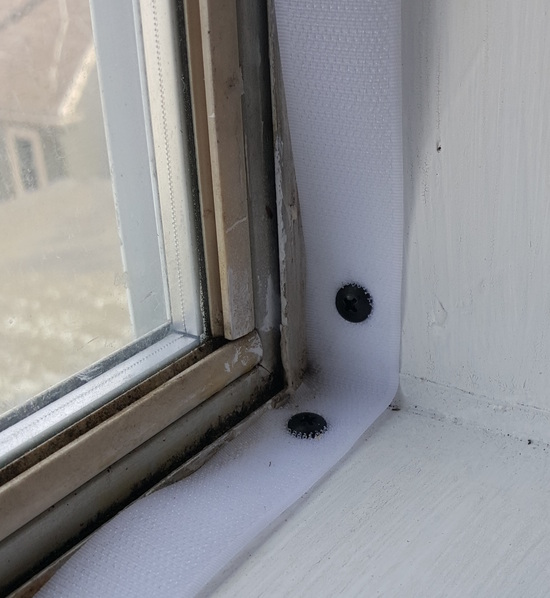 Then cut a piece of blackout fabric to exactly two inches wider than the window opening, and sew the loop-side of the velcro to it. Some velcro comes with adhesive backing, but we found that wasn't strong enough. This blocks enough light for an adult, but there will still be a little bit of light leaking around the seam. To block this, put a second blackout curtain over the first. If the window faces east or south, you may need to velcro the corners to the window moulding to keep light from getting around the edges.

If you can't get out quite all the light, instead of removing all of it you can add some, so that there's always a constant low-level light. So a night light or something. The goal isn't complete darkness, it's no day-vs-night signal.

Update 2018-02-21: a friend tried this and reported back that when they left their window blacked out for months with cardboard mold grew between it and the window. So it's probably good to take these down every so often and let the space behind them fully air out. (They're in a more humid climate than we are; we haven't had any mold issues.)