During the summer (here) night-time outdoor temperatures are typically pretty pleasant, but sleeping inside can still be uncomfortable because of heat stored from during the day. The normal fan-based solution has two parts: fans in the windows with cross-ventillation to trade the inside air for outside air, and fans pointing at the people to enhance evaporative cooling. This works well, but we can do better!

What if we pipe the outside air directly onto you? Then you feel the outdoor temperature, instead of the current room temperature which lags significantly behind: 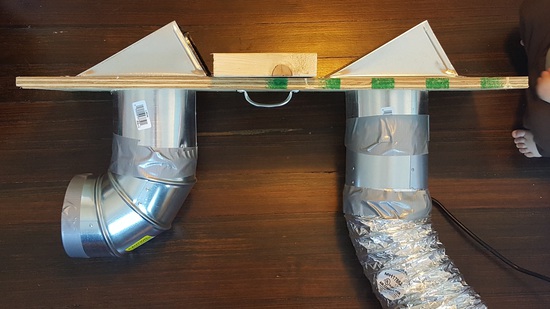 The idea is, you put a vent in the window with a flexible duct that runs over to where you sleep. The duct has an in-line fan to move the air. I built it with two vents, a powered one in and a passive one out, but the house is probably open enough that you can just do with the in one.

Not only does this blow cold air on you, but it does that while blocking out the light, if you like to keep your room completely dark.

What I would do if I were going to make another of these: