Here's a way to play Settlers of Catan with two players that David and I worked out this weekend. We've only played one game with it so far, and didn't think very hard about tradeoffs, so there are probably better ways to do it.

We played two games, but stopped the first one very early on. We agreed that one of us had an 80% chance of winning and so counted it as 80% of a win. Like a doubling cube this helps concentrate your time onto interesting games. 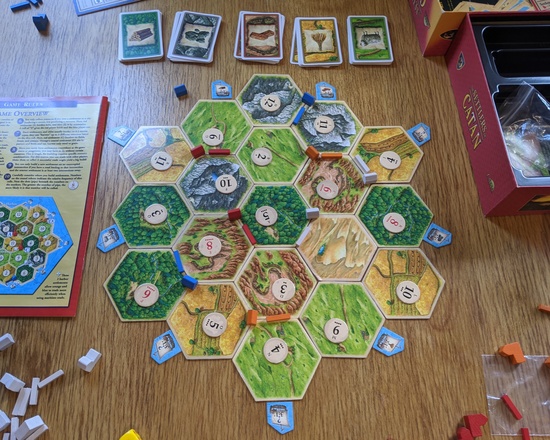 I enjoyed playing, though I don't know how many more games of it I'd like to play. In generally I enjoy the dynamic of games with more people a lot more, though under the current circumstances that's not always practical. It has less waiting than regular Catan, which is a plus.

I think the 36-card variant ("gamblers fallacy dice") would help here a lot more than in regular Catan, since otherwise the game can get unbalanced quickly due to quirks of the die. In general I like the way the card variant adds strategy, especially if it's easy for the players to tell what cards are yet to come.

Because there's no trading, ports are a lot more important than in a regular game. David picked a port-heavy strategy while I went for variety, and (n=1) ports works better.

After playing I looked around for other sets of two-player rules and there are a lot of variants out there! I haven't looked through them in detail to figure out whether I like this one best.