In chemistry class I really liked the magnetic automatic stirrers we had. The idea is that you put a magnet in the liquid you're heating and then make it spin from below, usually by rotating a drive magnet: 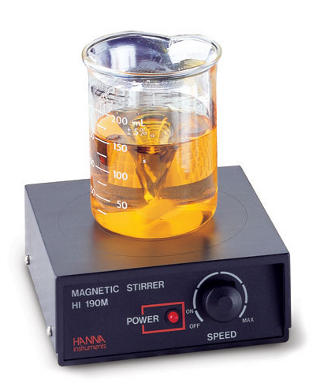 This would be nice to have for cooking too, but all the culinary stirrers I see are awkward bulky things that you put over your pot and stick stirring utensils down into the liquid. On most gas stoves, including mine, there is some space between the top of the burner and the grate that pots sit on. I want to put a little box there that spins a magnet at the bottom of whatever I'm cooking [1].

The standard way to spin a magnet like this would be to use electrical power, from the wall or a battery. But either of those is going to be very hard to work with in the high-temperature environment of a stove top. A wind-up stirrer could also work, but while you can get high-temperature spring steel it becomes bendier at higher temperatures which means that if you wind it cold and then put it into the flames it loses a lot of power. [2]

These also all have the disadvantage of either needing to plug in or be recharged. What if something could run off of the heat energy of the burner? Like a Stirling engine? There's a big temperature difference between the center of the flames and even a few inches away. Let's make that spin our magnet: