How is BIDA doing? To me this comes down to mostly two things: This post looks at the first question, and I'm working on a second one to address the other.

While the Masonic hall is large, the Masons tell us it has a fire-code capacity of only 150 people, and we'd hate to turn people away. Which means we have a bit of a cap on growth. Still, we could probably comfortably get up to an average of around 130 people while only rarely reaching capacity. It doesn't look like our switch from monthly to bimonthly had much of an effect on attendance either way. 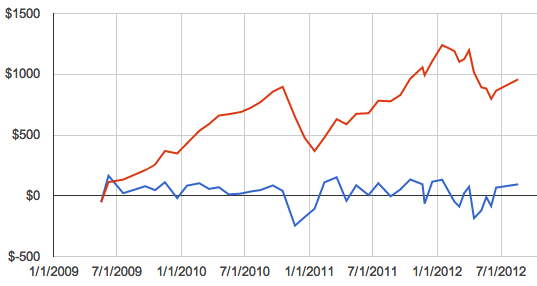 (The blue line is nightly profit/loss, the red is cumulative.)

As you can see, we built up a reasonable amount of savings over the past 3+ years [3] and have only been drawing them down slowly with the increased rent. Savings of around $1000 seem about right to me: enough that a few really bad nights don't kill us. I we were saving more than that I'd want to change the way we divide profits or raise our guarantees. Which we've done to some extent, generally becoming more sustainable in pay over the years, bringing amounts closer to what's standard for contra dances around here. [4]

Overall I think we're stable enough in terms of attendance and financials. I'd like to average a couple dozen more dancers and stop losing money on our regular series, but these both seem within reach.

Update 2012-08-23: at Edward's suggestion I've turned off line smoothing on the charts. The smooth ones are here: attendance, financials.

Update 2012-08-24: While we only have attendance back to the beginning of 2011, I wanted some idea of what it was like before then. Over the period we have data, our average contribution is $6.62 per person. (This includes volunteers and newcomers who get in free; excluding them the number is higher.) Assuming the past is like the present we can estimate attendance from income:

(The blue line is attendance, the red is estimated attendance.)

As the red one tracks the blue one pretty well over the period we have real data, I think it's reasonably trustworthy going back.

[4] Performer guarantees are now $75 instead of $50, board members aren't generally needing to donate their fees back to BIDA when they perform, sound is now $75 instead of $30. All of these mean we're paying people more or less in line with what is standard for our part of the country and aren't relying as heavily on people's goodwill.