When I compare our parenting decisions to peers and neighbors' we tend to be near the far end of thinking our kids are ready to do things on their own. I don't see other first graders (6y) unaccompanied at the park or crossing the street, and it was only this year that our third grader's (8y) friends started ringing the doorbell to ask if she could go out and play, while she's been going over and ringing theirs for a couple years. Last year when we gave permission for our second grader (7y) and kindergartner (5y) to walk home together the school said yes, but somewhat reluctantly and they didn't remember this situation with a kindergartner before. [1]

It's reasonably common for people to point at the past for examples of this level of independence being normal. Reading older children's books the kids wander everywhere, my dad walked to school and back alone in kindergarten, and articles comparing child walksheds by generation are evergreen viral content. The phenomenon of declining children's independence over time is well documented. But what I hadn't internalized until seeing it recently was that even in the US there is still much more variation than I see in my daily life.

A few weeks ago I brought the kids along to a dance I was playing, and we stayed with a couple who lived adjacent to a farm. They're on good terms with the farmers, and one afternoon they brought us over to look around. While I knew it was common for farm kids to have more independence and responsibility, it was different seeing it in person.

The farmers have several kids, and we ran into their 9yo moving soybeans for storage. They drove past us in a large tractor pulling a short train of wagons, and lined it up carefully with a hopper. They had another tractor set up with an unshrouded power take-off for an auger to get the beans up into the bin. After transferring the beans in the first trailer, they moved the train up to unload the second. All of this was completely on their own, and they moved like someone who had done this many times. 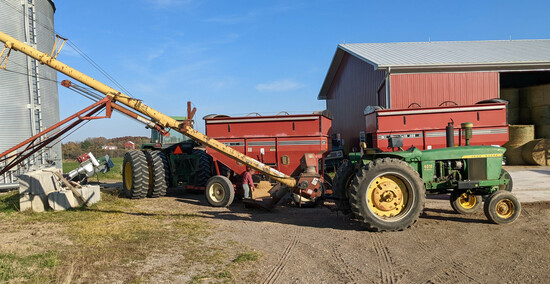 I'm not saying I'd let my kids operate serious machinery unsupervised at the same age—this is dangerous work even for adults—but it illustrates how wide a range there is in what different people consider appropriate and normal levels of independence and makes me feel less like I have extreme views.


[1] The school is about 120 years old so they definitely have had many kindergartners walk home before, but apparently not within institutional memory.