Sleeping on a plane is no fun, mostly because you can't get horizontal enough. Unless you spend thousands for a lie-flat seat. At the same time the current deck-with-seats configuration gives much more room for cargo than is really needed. What if we used bunks? Here's a cross section view of a typical 737-sized airliner, comparing the current seated economy layout with a proposed sleeping layout: 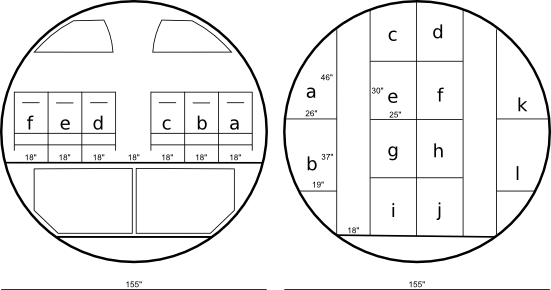 In the same cross sectional area that currently gets you six seats and an aisle we have twelve bunks and two aisles. This doesn't double capacity, though, because bunks are a bit more than twice as long as seats. Still, this would be a dramatic increase in comfort with only a small decrease in capacity.

(You'll notice we did get rid of baggage space entirely. If the bottom of the bunk had a shelf for you to put your bags on, your feet could go under it. With 30" of vertical space you could have 12" for your feet and 17" for bags, which is more than enough.)

(I would bet this currently violates FAA regulations for airliner configurations, which are written assuming people are in seats. It would be worth it to look over which regulations apply and figure out whether they should be changed to permit this layout or whether there are good reasons not to allow it.)

←
How to play the footboard Celli Agrumi
→