I just got back from a tour with Kingfisher and it was pretty great! Some thoughts, not in any particular order or especially cohesively:

This is the fourth tour I've taken (see: 2012, 2013, 2014), and the first one I brought Lily on. Having one of my kids along was different, but it really went very well! The bit that I would have expected to be hardest from my experience as a kid was the amount of time in the car, but tablets have really changed this. Our rule with tablets is "long car trips and airplane rides only", and tablet time is enough of a draw that I think Lily may have wanted to come on this tour for the tablet time alone! Even on the 10.5hr Boston-Richmond leg she didn't get bored or unhappy.

Sleep also went surprisingly well. She's mostly not sleeping at naptime anymore, and instead just has quiet time with a story tape. But she does need a long time at night (~10hr), and with the gigs she wasn't going to be getting to bed until about midnight each night. I made sure our rooms weren't too bright (as much as possible) and she seemed to do a good job sleeping until she wasn't tired anymore, generally waking around ~10am. One thing that was helpful here was tucking spare towels or blankets over the curtains to make them block more of the light: 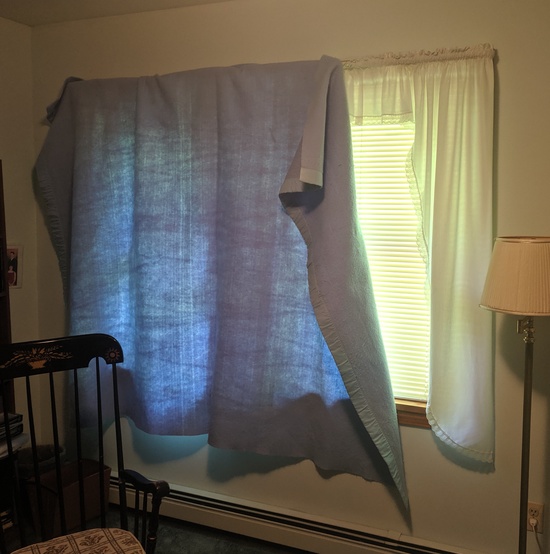 At the dances themselves she would wander around, play with legos I'd brought, get various adults to read to her, and at several of the dances play with other kids who were there. Occasionally she would sit on stage behind me, and was pretty good at staying out of the way. She did crawl under my chair once and started the metronome on my electronic drum kit, which was loud and surprising, but mostly she has a lot of practice at dances from coming to dance weekends with me. 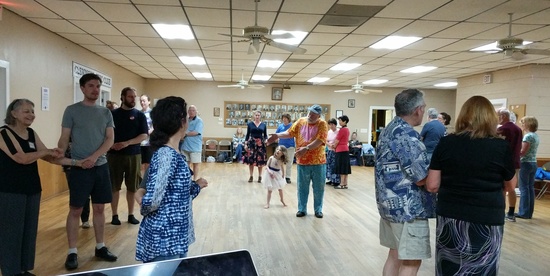 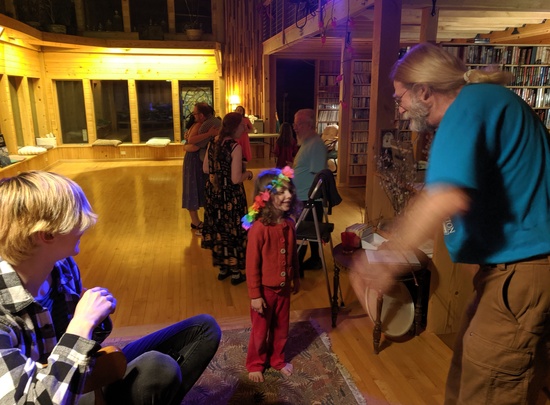 In addition to just enjoying having Lily around, it also made stopping and seeing things more fun: 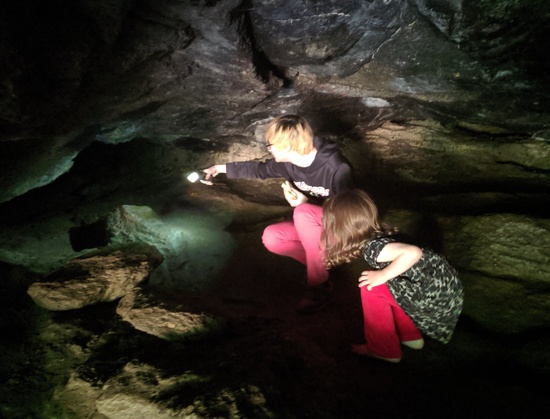 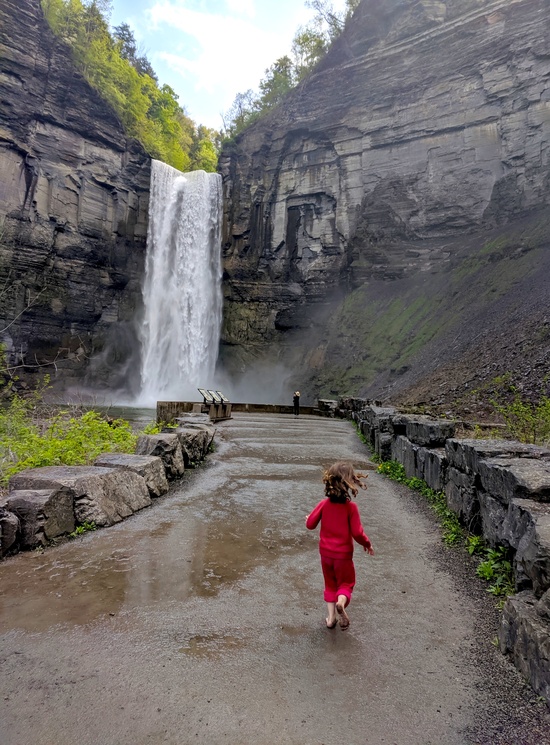 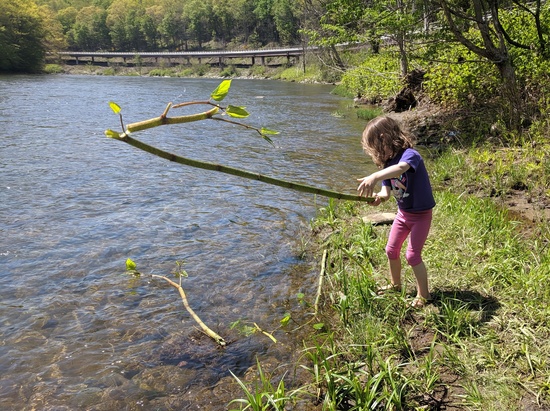 On past tours we've brought and run our own monitors. Having consistent sound from place to place is really good. On the other hand, it's also a lot of work, bulky, and my portable 1818VSL no longer is capable of live sound after presonus removed that capability. (Still grumpy about that.) This time, with just two of us, I brought one of my K10 speakers and a mini-mixer and then Cecilia used the venue monitor. This worked pretty well and I'd probably do it again.

I wanted to make recordings so we could listen back to them (so important!), and instead of a splitter snake went with just a bunch of little XLR splitters: 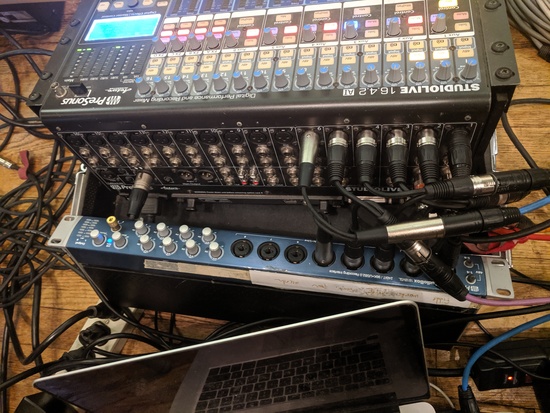 That would probably be less awkward if I had bunch of very short (~2ft) xlr cables to extend them by, but it was fine.

Over the course of the tour I feel like our playing got a lot more cohesive. Several of our sets that had been solid but a bit boring have now grown lots of interesting things to do with them. The cycle of playing, listening, talking, and more playing is pretty hard to beat. As is learning what dancers actually like by trying things live.

My rhythm stage setup continues to be kind of a lot of stuff: 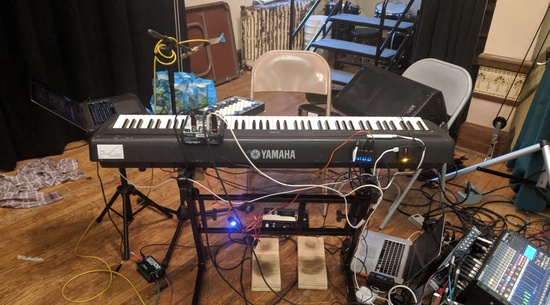 I've given up on the hat (hurts my neck, not fun to play) and after a brief detour through running everything through the laptop I'm now doing piano and feet direct to the board, and the other sounds via the laptop. This is more robust, and gives the sound person more control.

Before the first night I got the idea of using the breath controller to swell an organ sound over top of the piano. The idea is kind of like you have a bag of air that you're inflating, and the size of the bag determines the volume of the organ. This actually worked really well, and I ended up using it a lot.

(The code is on github, though it's pretty messy and mostly intended for myself.)

For lunch/dinner/snacks on the tour we got groceries and brought along a cooler. This is what we would do in the early days with the Free Raisins, but as Amy and Audrey stopped being broke college students we started going to restaurants more. I'm ok doing that, but would generally rather save the money and do groceries, and it was nice getting to do that again here. We spent $46 on groceries (bread, cheese, chicken, peanut butter, yoghurt, celery, carrots, apples, oranges, bananas, grapes, etc) which over three people and six days is $2.60/person/day. This is less than we spend at home (~$5/person/day) though it doesn't include breakfast or Friday dinner, which were courtesy of our wonderful hosts. Also much healthier than what I would have been eating if we were stopping at restaurants.

Income was $1,292 for two people, so we made $425/each after expenses ($71/night). This was less than the first Free Raisins tour ($82/night) primarily because that tour included two nights at Glen Echo, which is a big dance. Though not as much less as it might have been, because many dances can afford to pay a two person band a bit more than a three-person one.

Staying with people is one thing I like a lot about touring. They're generally just wonderful friendly people. And this would definitely not be possible without hosting, since hotels are so expensive! Highlights here were seeing a house completed that I had seen the foundation of in Summer 2012, and Lily getting to play with a real digger: 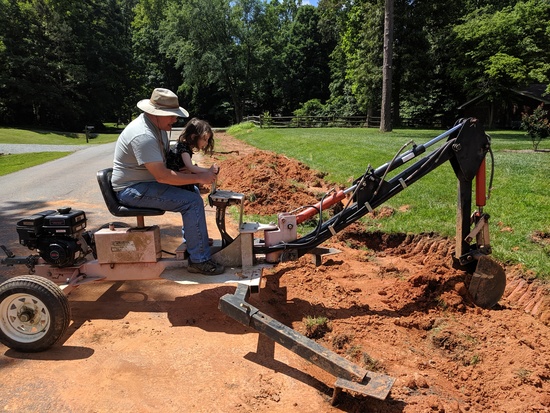