On yesterday's post about generators, Chris asked whether power outages are worth planning for. That's a good question: very roughly, you can think of whether it is worth spending $X to handle an emergency with probability P as whether you'd be willing to spend $X/P if the emergency were certain. So: what's P?

Let's start by looking at national blackout statistics. The Energy Information Administration has power companies report data on many things, including reliability starting in 2013. Taking "SAIDI With MED" (System Average Interruption Duration Index including Major Event Days), weighting by "Number of Customers" (lines of service), and excluding utilities that didn't report these values, I see (sheet): 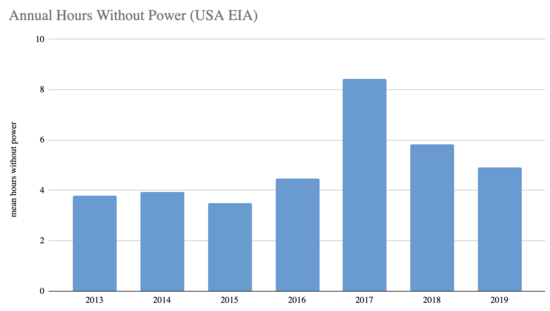 In some ways this is an overestimate of what I care about: it includes both short and local outages that, while annoying, are not much of an issue. I am much more concerned about longer regional outages: if everyone in the Boston Area was suddenly out of power at the same time there wouldn't be anywhere near enough generators / out-of-area hotel rooms / etc to go around.

On the other hand, it's also an underestimate: the worst power outages have been from major storms—Hurricanes (Isabel, Ike, Sandy) and winter storms (CA, TX)—and accidents—Northeast, Southwest. The 2013 - 2019 period looks like it had fewer of these than typical? Additionally, with the grid becoming more interconnected and more computerized the risk of a large regional outage seems likely larger?

How likely would you estimate a >3d outage is for the average person in the US over the next 10y?