In music, as with everything, there's a tradeoff between reliability and hassle. If I come to a gig with my mandolin and the neck falls off, I'm going to be having a bad night. But mandolin necks only rarely fall off, and bringing an extra mandolin would be expensive and annoying, so I don't. On the other hand strings do break, sometimes comically, so most musicians bring backups.

My rhythm stage setup is in an awkward position here, because general-purpose computers aren't all that reliable. Not only do computers sometimes break, but my setup isn't something I can properly back up, and could be hard to replicate on another computer.

This is a silly situation: one of the amazing things about computers is that copying things is free. I should be able to upload my setup, and then download it onto any other computer in minutes, and be going right away. Why can't I do that with my stage setup? I found out yesterday when my computer died and I was trying to set up a new one [1] before the next Kingfisher gig (Saturday). Issues I ran into:

There were, of course, other parts that went well. My main routing code is open source and worked out of the box. My stand-alone pitch-to-midi code also had no issues. My Reaper backup worked ok aside from losing plugin settings. Part of me wants to move entirely to an open-source synthesize-everything-myself way of doing things so I can just download and run my software, but this bumps into the hard realism of creating sounds being difficult and requiring skills I don't have.

For years I've tried to live my life so that if my computer died tomorrow I wouldn't lose anything, and while that's true from a "lose data" perspective it's far from true with a "lose time" perspective.


[1] Yesterday morning all the USB C ports on my MacBook stopped working suddenly. It rebooted itself out of nowhere and when it came back it wouldn't charge, wouldn't talk to the external monitor, and of course couldn't see my various MIDI devices. It freezes and reboots after running for 5-10min. It will still charge when it's suspended, so it's not quite dead, but it's pretty dead.

I tried resetting the SMC, and the NVRAM and PRAM without luck.

I have a long-term loan of an older Mac with a cracked screen, that I usually use for recording. The screen makes using it on its own tricky, but now that I have an external monitor I like it's ok: 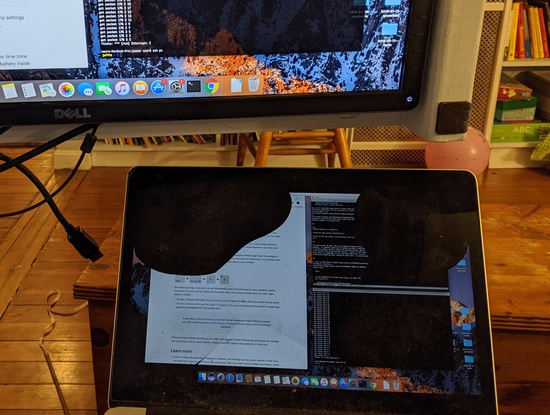 This post is from setting that up for music.