Houses are strange: customarily, there's no documentation. Want to know where the plumbing is? Where the wires are? Where the structure is sturdy enough to support something heavy? Sorry, the walls are in the way. You can't see it, and no one wrote down where to find it.

Sure, we have workarounds. Stud finders can tell you what the structure looks like, unless your walls are thick (most of mine are two layers of drywall over lath and plaster...). Non-contact voltage probes can detect live wires, unless they're shielded, or not near the surface of the wall. You can make decent guesses about where it would've made sense to run things, but past people who have worked on the house have likely made all sorts of strange decisions for reasons that are now lost. All of which is to say, when you cut or screw into a wall, you're always taking a bit of a risk.

With that in mind, any time you have the finished surface of your house opened up, please take lots of pictures! Take pictures of the walls, the ceiling, the floors, anything. Later on, if you think you might need to open one of those places up for something, you will be glad you did! 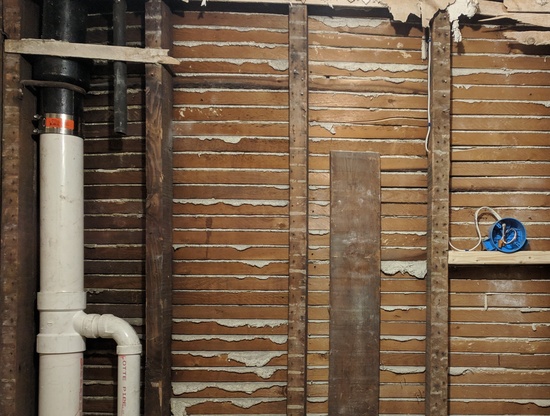 Even though I've had this approach for years, I still often find myself wishing I had taken more pictures.

I wish there were a culture of this kind of picture taking, and including them in the sales of our houses. One where a house would be worth a bit more if there was documentation for the parts you can't see, and where people took absence of documentation as a sign that a person might be trying to hide something. Perhaps now that most everyone carries a good camera on them at all times this will change, but I expect not. Among other things, providing pictures means likely opening yourself up to some kind of liability, in case anything wasn't done perfectly. If only people would consume transparency responsibly!