Kitchen thermostat when I came home from work today: 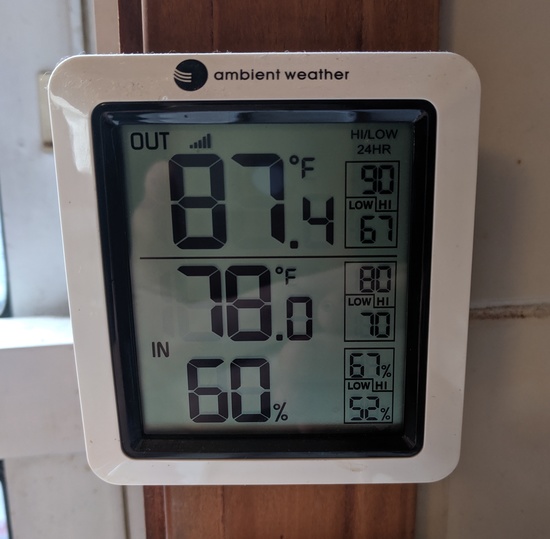 This is mid-July in Boston, without air conditioning, just fans. The idea is you cool the house off at night, and then keep it from warming up too much during the day. It's cutting about 10F off the day's high.

The key idea is that at night you want to circulate as much cool outdoor air through the house as possible, to cool down the structure of the house. Your house has a lot of mass, and you want that mass to begin each day with as little heat as you can manage. This would work better in a stone building, but even in a wood house like ours it helps a lot.

We have a whole-house fan (4500 CFM) [1], while we used to use two box fans (~2000 CFM each) in windows pointing out. The main advantage of the whole-house fan is that we can leave it up all the time instead of needing to take the box fans out of the windows each morning. It also has a cowl and gets a better seal on the opening, so it probably exhausts air better. And it's quieter, since it's not blowing out anyone's bedroom window.

We wait until the outdoor temperature is below the indoor one, then turn the fans on and open all the windows in the house. With some house layouts it might make sense to keep some windows closed in order to better direct the air through the house, but our fan is powerful enough and central enough that our house seems to cool best with everything open. Opening things at just the right time isn't very important; the main thing is we definitely want it running late at night and very early in the morning when the outside air is at its coolest.

In the morning, when the outdoor temperature starts rising past the indoor one, we turn the fans off, close all the windows, and draw the curtains. We'll run ceiling fans in rooms that we're in, as needed, but we try to turn them off when we leave the room because they do accelerate the warming of the structure. We try to postpone things that put out a lot of humidity (showering, dishwasher, boiling water) or a lot of heat (oven) until the house is open for the night, or soon will be. We don't worry much about running the toaster or normal cooking, since dry heat isn't that bad and it's too annoying to never cook anything during the day.

While it's a bit more hassle than AC, I like that the air isn't unpleasantly dry, and I like that it's cheaper. [2] The main downside is that as we get into the late summer the day-night difference starts to shrink and we can't cool the house down as much. Still, even then it's usually enough except on the very hottest nights of the year.


[1] I'm considering upgrading to one rated for 12,000 CFM though, to circulate even more cool air through the house.

[2] It's not that much money, though it is something. If we figure 50kWh/day for AC and 3kWh/day for the whole house fan, at our electricity rate of $0.27/kWh (electricity is expensive here) that's $400/month for AC vs $24/month for the fan. It's also possible that the 50kWh estimate I'm seeing for a house our size is assuming you want a steady 72F or something, and if we let it rise to 80F by the end of the day that would be cheaper.