See the end of this post for a response from Giving Multiplier.

Giving Multiplier launched last fall to promote effective giving. You may have read about it at the time in Future Perfect, but I learned about it more recently, from Giving What We Can. Since it aims to convince people to donate to excellent charities, many of which are GiveWell-recommended, you might expect I would be happy about this, unless you'd read last week's post about GiveWell's donation matching.

So: what is Giving Multiplier? You come in as a person who has a favorite charity in mind, and it suggests you split your donation between that charity and one of the charities it recommends.

First you select your favorite charity: 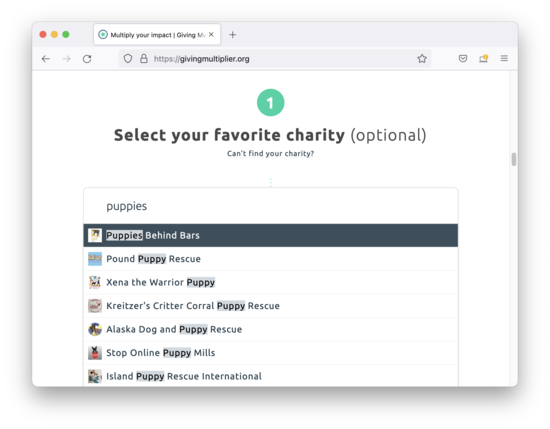 Then it asks you to choose one of its favorite highly effective charities: 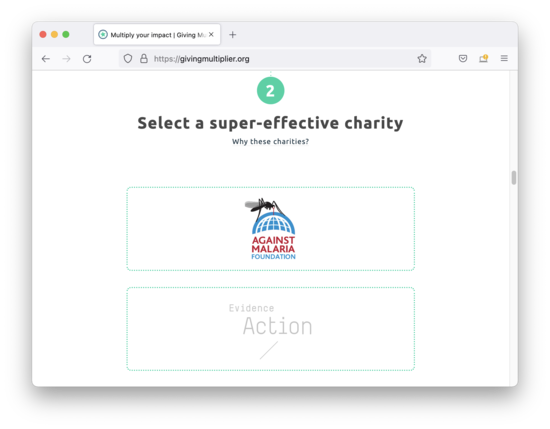 It asks you how much you were thinking of donating, in this case $100: 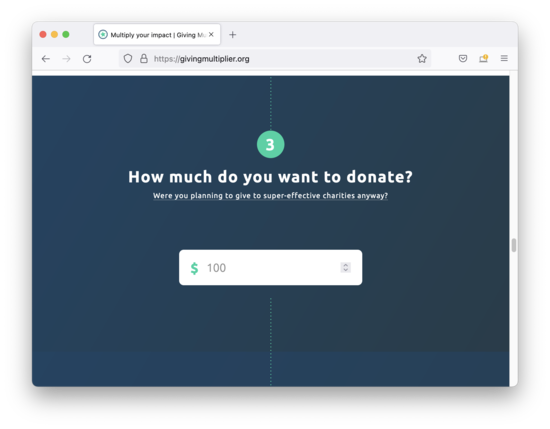 It suggests splitting your donation 50-50, and offers to provide a 25% match if you do: 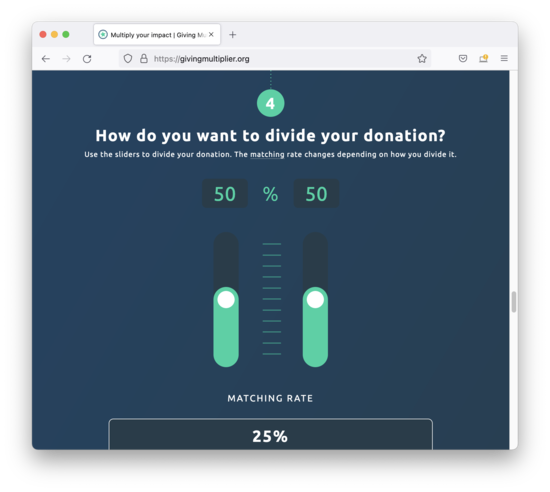 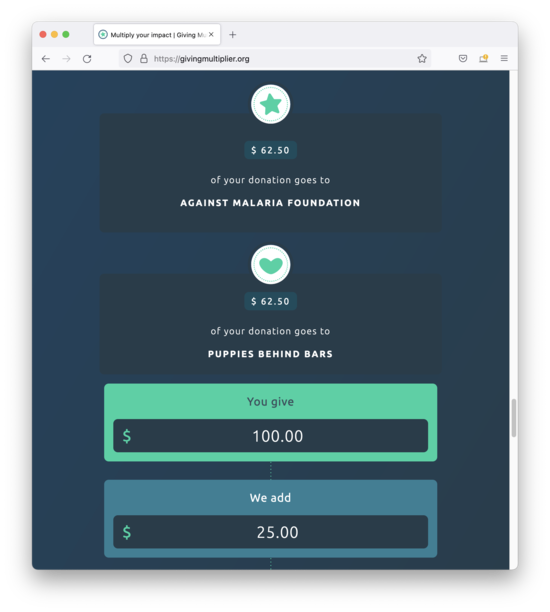 I read this as an offer: if you donate some of your money to both charities, so will it.

First, the site reads as if it will send matching funds to the charity of your choice, but really all of that money comes from you. Play with the sliders and you'll see that if you direct all the money to the effective charity then the match goes from 25% to 50%: 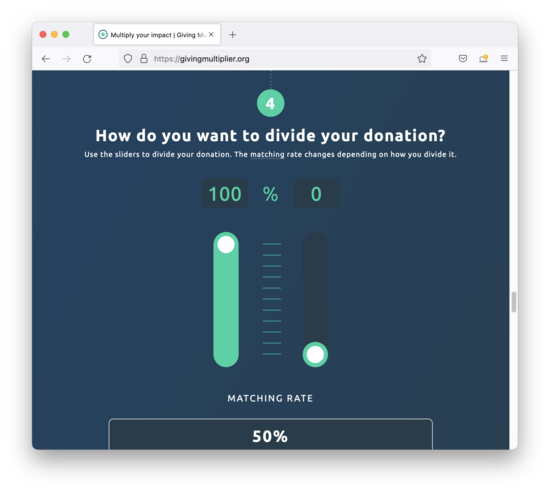 Go the other way, and you'll see it won't let you give less than 10% to the effective charity. At that point, the match is just 5%: 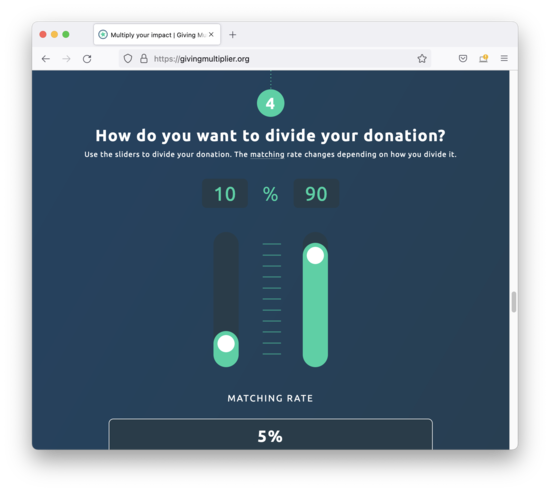 A simpler way to describe this is that it matches whatever portion you choose to give to the effective charity at 50%, and doesn't match your donation to the other charity at all:

After reviewing a draft of this post, Giving Multiplier added a Transparency Page where they discuss this, and linked it in Step 4 as "Learn how our matching system works. It may be more complicated than you think." This is an improvement, but I still think the design of the site misleads users into thinking that by participating in Giving Multiplier matching funding will, on net, flow to their favorite charity.

That aside, while it claims to "multiply your impact", are you actually causing it to donate money that it wouldn't otherwise donate? Let's look at what it says to prospective funders on its Fund Us page:

If you would like to become a matching funder, please fill out the donation form below. All of your donations will go to charity. Your matching funds will be used for the current or subsequent donation cycle to match other people's donations. Any matching funds that are unused after 6 months will automatically be donated to effective charities.

The pool of matching funds is all going to go to effective charities, regardless of whether you or anyone else signs up to have your giving multiplied.

Now, your donation does likely encourage contributions from future matching funders: is that impact? It depends what those funders would do instead. Since it is drawing funding primarily from the effective altruism community, where people typically have funds they intend to donate and are looking for the most effective way to do so, I think this is unlikely to increase total donations from those funders.

On their new Transparency Page they do say "more than half of the donations going into our matching system are donations that, according to the donors, would not have gone to super-effective charities were it not for Giving Multiplier", but this is not the right counterfactual for the main users of Giving Multiplier. Imagine somebody goes to Giving Multiplier, learns about effective giving, and then decides to provide some money to the matching pool. They say "no" when asked something like "would you have donated this money to a highly effective charity if Giving Multiplier didn't exist", but that doesn't mean they would also say "no" to "would you donate this money to a highly effective charity if Giving Multiplier had to decline your offer of matching funds". Additionally, as discussed in last week's post on GiveWell's donation matching, I don't think asking users to confirm that their donation is counterfactual meets the standard of evidence we usually apply for impact claims in effective altruism.

The best case for donation matching is as a way to say that you think a charity's work is valuable enough that you're willing to put your money toward it in the hope that others will join you. A few years ago I offered a donation match on my blog, though I ended it with the clarification that it was "a donor illusion, in that you're not actually affecting the amount I give them this year."

On the other hand, Giving Multiplier influences donors by giving the impression that they are reallocating money through their choices when that's not actually happening. I don't think this is something we should be doing in effective altruism: it is more important to build a robust movement of people collaboratively and honestly maximizing impact than it is to move additional money to even very good charities in the short term.

(It is possible to use this platform to directly reallocate money if you have preferences among their "highly effective" charities, have money you were already planning to donate, and are willing to lie on forms. For example, say you think that animals matter much more than the typical donor does. You could move $X in matching funds from a mix of effective charities to specifically the Humane League, as long as you were already planning to donate $2X to the Humane League. Please don't do this.)

Lucius and Josh, the people behind Giving Multiplier, have done some great research on what motivates people to donate, how people think about giving, and how people with different moral views can coordinate. And donation matching with misleading claims of impact is very common in the nonprofit world. But it's because I respect them as researchers and as people trying to make the world better that I'm holding their work to a higher standard here.

I sent a draft of this post to Lucius and Josh, and made changes based on their feedback. They disagree with my interpretation here, and they asked me to include their response:

We thank Jeff for his comments. We have tried to be clear from the start about what Giving Multiplier does and does not offer users, and we believe that Giving Multiplier's users have understood its fundamental principles. However, in an effort to be as clear as possible, we have responded to Jeff's comments with the addition of a detailed transparency page.

Our transparency page addresses all of the issues raised by Jeff in this post, and we recommend that interested readers start there.

The transparency page is prominently linked on the home page in two places. In addition, we now require donors, before submitting their donation, to explicitly acknowledge (using a checkbox) that they understand that our matching funds are pre-paid. These measures ensure that our users understand how Giving Multiplier works and what it can and cannot offer them.

About a thousand donors have used Giving Multiplier so far—most of whom are new to effective giving. We have received hundreds of messages from donors who say that they love the idea of donating both to their favorite charity and a highly effective charity. Not a single user has said that they felt misled.

Contrary to what Jeff says in this post, Giving Multiplier's matching system offers donors additional value. As explained on our transparency page, this happens in two ways:

We agree with Jeff that this increased impact may be different from what some donors at first have in mind. We took this point seriously, created our transparency page, and linked it prominently so that all donors have the information they need to make an informed decision about whether to use Giving Multiplier and what to expect from it.