A traditional answer to economic problems in a country has been to allow some inflation. In joining the eurozone (replacing their existing currency with the euro) countries gave up this option. Now some of them need it back. How might they leave the eurozone and switch back to a currency of their own, as a step in economic recovery?

A simple answer might be "you close all banks, relabel everything (deposits, debts, salaries) in the new currency, print a bunch of money in a hurry [1], and open again as soon as possible". Then you end up with a currency that can start falling against the euro until your country is competitive again. In fact, a fear of this is leading to a "silent bank run" where people in greece are withdrawing their euros to store in safe deposit boxes or german banks: 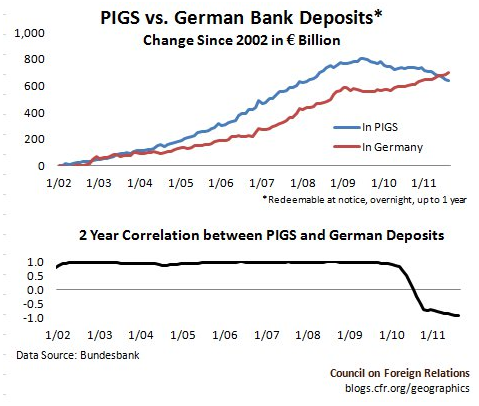 People also have debts to foreign banks. Say I'm in greece and we use this plan. I am suddenly getting paid in drachmas which have fallen against the euro, but most of the stuff I want to buy is cheaper too, so I'm ok. Except that debt for things I bought in the past and still owe foreign banks for becomes even more difficult to keep up with.

There's also the issue of government debt. Would a departing portugal just claim that the debt it owed is now in escudos? Would they default on their debt entirely? (Which seems to have gone ok for argentina)

There may not be any good solutions. Perhaps by joining the eurozone countries gave up this freedom for good. But if you don't believe this, and think you know how a country might switch from the euro, your answer could win you $400K. The prize rules require the proposal to be entered by the end of january and address:

Can you solve this puzzle?


[1] That's impractical to do on short notice, so either you've prepared new money (very quietly) in advance, or you could try just taking euros and putting a special stamp on them (though then your currency can only go down against the euro).