The Free Raisins now have a CD: Live Summer 2012. We recorded it live, and edited dance-length sets down to be a better fit for a CD. We're also having a CD-release dance, Sunday February 24th at the Masonic Hall in Cambridge. (fb event) 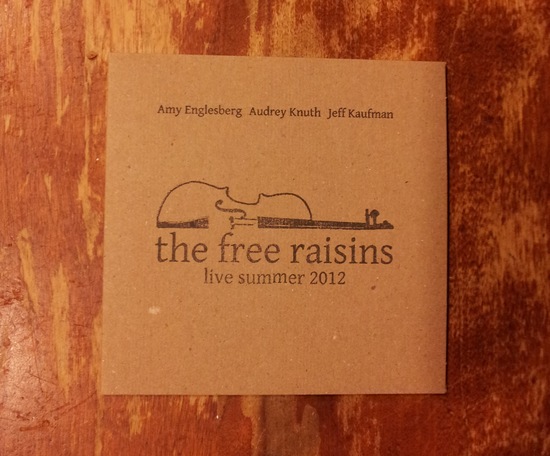 If you're curious, you can listen to full length previews for the whole thing.


More details on making the CD. We brought Audrey's board with us on our summer tour and recorded every dance in multitrack. If we were doing this now we would probably use my new board because it's so much smaller, assuming Presonus sorts out the phase reversing issues. Because we weren't going to ask every sound engineer along the tour run sound on Audrey's somewhat unusual digital board we borrowed a splitter snake from Walter Lenk. This meant that every microphone went both to our board and to the house system. (One nice thing about this was that we could easily bring and run our own monitors. The consistency of knowing we were going to be able to hear ourselves well was really nice.)

Each day, driving to the next stop on the tour, we would listen back to the previous night and rate tracks. After the tour we got together and winnowed down the recordings more, picking our favorite recordings of different sets and scrapping ones where we weren't happy with any of the sets. Then Audrey (who went to school for this sort of thing) cut the tracks down to a more reasonable listening length and employed all manner of computational wizardry to balance the instruments and clean up the sound. Eight nights at about 1½hr of music a night gives twelve hours of music, cut down to half an hour of finished music on the CD.

For turning Audrey's finished digital files into something tangible we used a disc duplication service. We sent them high resolution images for the cover (png, svg) and disc face (png, svg) and they sent us a box of CDs, a box of blank wallets, and a stamp for the cover. We had planned to print (on paper) an insert with a track listing but that turned out to be annoying, so we ordered another stamp (png, svg) with a track listing to go on the back.