A few weeks ago I wrote about my new audio interface. Since then I've used it to run sound at two dances, and it's done what I wanted it to. I've also tried to use it for recording, however, and am much less happy. I keep getting clicks in the recording. [1] For example:

Zooming in on the audio it looks like this:

That's three tracks of audio and one track of nothing, showing a single sample out of place.

I made some more samples:

Looking at these I thought I saw a pattern: for a few samples in a row the sign is reversed. It's hard to be sure, though, with this setup. So I tried a higher pitch sine wave and put the mics at different distances so they'd have phase shifts relative to each other. Sure enough, some glitch is flipping the polarity: 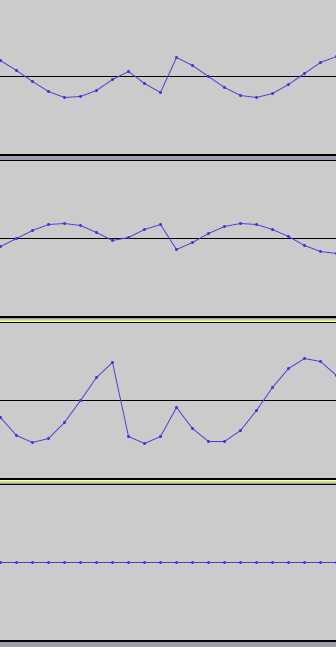 (On track 1 two samples are flipped while on tracks 2 and 3 three are. On all the others I looked at the same number of samples were off on every track.)

What would do this? I don't know. I've posted on the presonus forum; we'll see what they say.


[1] While I noticed them whatever I was doing, I decided to make a test setup so I could really see what was happening. I had my phone generate a sine wave and pointed three microphones at it. I restarted my computer (a mid 2011 13" macbook air on 10.8) so it would be fresh, started VSL (1.2.5296), started Audacity [2], and set it to record all 8 tracks.

[2] I also got these clicks when using Presonus' Studio One, but I'm more familiar with Audacity so it was easier to take screenshots and make clips there.