If you're talking to two people, one with a small cut and another with multiple sclerosis, everyone present will agree that having multiple sclerosis is much worse. If you offered the two of them some magic option that would restore exactly one of them to full health, they would probably be able to agree on who should get it. But in general, how should we compare across people to figure out whose situation is worse, who would benefit more from treatment and who, everything else being equal, should be treated first? This example was easy because the difference was nice and large, but what do we do in harder cases?

One is to ask people questions like "if there were a surgery that could restore you to full health (without improving your lifespan) but had a 20% chance of killing you, would you take it?" If they say "yes" then this indicates that this disability, for this person, is more than 20% as bad as being dead. Ask these "standard gamble" questions to a lot of people with a lot of disabilities, varying the percentages, and you could build up a list of how bad different ones are, all on a common scale.

This would useful for balancing projects against each other, figuring out what to focus on, and generally setting funding priorities. Unfortunately people are really bad at answering questions like this. Mostly we're just bad at thinking about percentages and chances of bad things happening, but you also wonder about the problems of asking someone with, say, "Schizophrenia: acute state" to answer this sort of question.

You could fix this by asking people about "time tradeoffs". For example, you could ask someone with a disability about whether they would take a medicine that would restore them to full health for a year even if it took two years off their life. Alternatively you can ask people, generally public health professionals, if given the choice between curing 1000 people with disability X and 2000 people with disability Y which one they would choose. These "person tradeoffs" get us out of needing to ask about probabilities, which means we can probably trust the numbers more, but we're stuck either with collecting data from people with the disabilities in question (hard work, maybe the disability affects mental function) or trusting that public health experts fully understand what it's like to have different disabilities (seems unlikely). And even if we did decide that we were only going to collect data from people actually affected by a disability, remember that in many cases they can't actually give the comparison we want because they haven't experienced both having and not having the disability (ex: blindness from birth).

The first Global Burden of Disease Report (pdf) attempted to collect these weights for a large number of different diseases. They got a panel of public health experts to come to Geneva and through discussion around "person tradeoffs" came to consensus first on weights for 22 "indicator diseases". Then they agreed on weights for the several hundred remaining diseases by comparing them to these anchor conditions.

You might worry that the final weights would be really strongly affected by the particular consensus the Geneva group happened to get for the 22 anchors, but they ran nine other attempts with different experts and the average of those attempts correlates pretty well with the Geneva results: 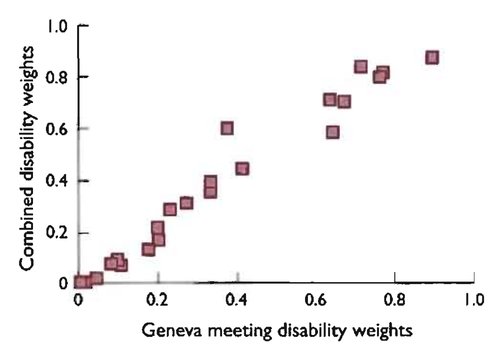 For the 2010 update to the Global Burden of Disease weights (pdf, also see the appendix pdf) they decided to take an entirely different approach. Instead of asking experts to figure out tradeoffs they asked lots of people in several countries (Indonesia, Peru, USA, Bangladesh, Tanzania, plus a 'global' internet survey) to do lots of comparisons where given two people they would say which one was healthier. This makes a lot of sense, asking lots of regular people, and the question is much simpler to answer. On the other hand, while I'm not sure experts are all that good at estimating how bad it is to have various disabilities I would expect regular people to be even worse at it. Still, there was at least pretty good correlation between countries: 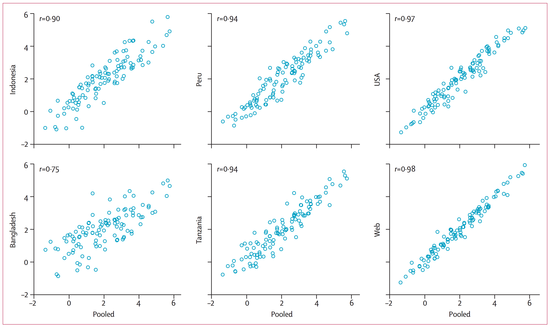 But hold on: how did they turn a large number of responses where people said one disability was more or less healthy than another into weightings on a 0-1 scale where 0 is full health and 1 is death? It turns out that a quarter (n=4000) of the people who took the survey on the internet were also asked the "person tradeoff" style questions used in the 1990 version, which they called "population health equivalence questions". So they first determined an ordering from most to least healthy using their large quantity of comparison data, and then used the tradeoff data to map this ordering onto the "0=healthy 1=death" line.

This means that when we look at the cross-country correlations above we're only seeing their agreement on the relative ordering of conditions, not on the absolute differences. If people in Indonesia on average think that the worst disabilities are only 10% as bad as being dead while people in Peru think they're 90% as bad, this wouldn't keep them from having perfect correlation on a chart like this. Which is kind of a problem, because we need more than an ordering for prioritization.

Update 2014-09-17: See Toby and Owen's comments below; they actually did something more complex, involving treating "A is sometimes ranked above and sometimes below B" as an indicator that A and B are similarly harmful.

It turns out that this method of estimation actually gives pretty different results from the one used in the earlier version: [1] 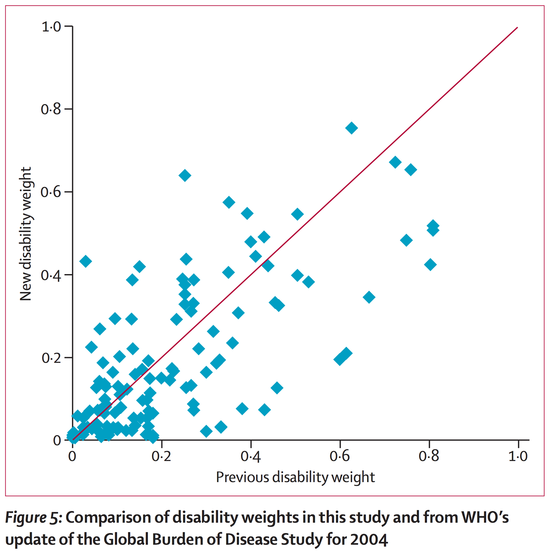 Yes, there's a correlation, but it's pretty weak. And it's probably not just about the fifteen years between when most of the first estimates were made and when most of the second were; these aren't disabilities that are quickly changing. This indicates that what we're trying to measure is just not that well captured by the measurements we're making.

So, a summary. Getting good answers means asking people questions they're not good at thinking about, or that they are good at thinking about but don't have the right experience to be able to answer. It's not too surprising, then, that the answers you get via different methods don't agree very well. We do still need a rough way to say "benefit X to N people is better/worse than benefit Y to M people," but trying to do this in the general case doesn't seem to have worked out very well.

These disability weights are only one step in estimating $/DALY for various interventions, and the messiness here is in some ways much less than the messiness in the other steps. After reading about how these estimates came to be, I'm pretty glad GiveWell doesn't put much trust in them in figuring out which charities to recommend:

The resources that have already been invested in these cost-effectiveness estimates are significant. Yet in our view, the estimates are still far too simplified, sensitive, and esoteric to be relied upon. If such a high level of financial and (especially) human-capital investment leaves us this far from having reliable estimates, it may be time to rethink the goal.

All that said—if this sort of analysis were the only way to figure out how to allocate resources for maximal impact, we'd be advocating for more investment in cost-effectiveness analysis and we'd be determined to "get it right". But in our view, there are other ways of maximizing cost-effectiveness that can work better in this domain—in particular, making limited use of cost-effectiveness estimates while focusing on finding high-quality evidence.

This isn't to say we should never use disability weights; even if they were just made up by one guy on the spot (and they're better than that) this would probably still be better in some cases than refusing to make quantitative comparisons at all. Getting rough numbers like this is especially useful for avoiding scope insensitivity problems, where you might be comparing a large number of people with something minor against a small number with something major.

(I'd really like to look into the QALY numbers people use and how they get them. I believe the process is similar, but I'm not too sure.)

For curiosity, however, and with all that in mind, what are the actual numbers they found? Here are the 2010 weights:


[1] Technically these are the results from the 2004 update to the 1990 version, but when you look at where their estimates come from (pdf) you see that most just say they're kept unchanged from the 1990 version.