Chocolate is tasty on its own, but it's generally better if you make it softer before you eat it: hot chocolate, chocolate cake, truffles, fudge, chocolate sauce. A few years ago we started making a quick dessert with peanut butter and chocolate chips, heated together in the microwave. You can vary the proportions, but most combinations end up with something that is quite tasty on its own or as a sauce. The main thing to worry about is keeping the chocolate from burning: it's full of sugar, so if it gets too hot it will be ruined. I just don't microwave it too long at a time (>15sec) and stir it often.

The main downside of this sauce is that it tastes like peanut butter. I don't mind this, being happy to add peanut butter to anything, but it's not for everyone. A couple months ago I decided to try putting in a small amount of cow butter instead. This works well: you get something of a similar gooey warm consistency but without a peanut taste. Really, this is a lot like Ganache but with butter instead of cream as the source of dairy fat. [1]

When I was a kid, my sisters and I had a very tasty chocolate raspberry pie at a fair. Since then we've tried at times to recreate it, but I've never been all that happy with it because the chocolate was too hard. I decided to try and make it again, this time with butter-chocolate. I made a pie crust [2], baked it, put a layer of chocolate on the bottom, and filled it with raspberries (recipe). It's not exactly right, but it's quite close and I like it. 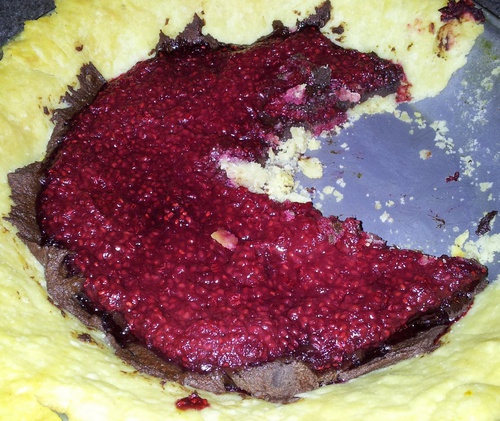 [1] I wonder if it would be improved by a small amount of milk?

[2] There are people who feel strongly that a pie crust should be made with butter (instead of oil) and be flaky. I have no objection to making a crust this way, though it's harder and more work, but I contend that an oil based crust is also legitimate. I like them similarly, though this may have something to do with growing up with oil ones.