At a lot of smaller contra dances they expect the band to bring their own sound system. About a year ago, the Free Raisins were starting to get booked for more dances, and it was getting very frustrating to be assembling something from pieces each time. [1] I decided I wanted something sufficient for small to medium sized dances. What did this consist of?

The first thing I got was a main speaker. After looking at various recommendations, and hearing people say the mains have the biggest effect on the quality of sound, I decided to get a QSC K10. This is a powered speaker, which means it is both a speaker and an amplifier. There's a lot I like about the K10, and nothing that frustrates me, so I'm very happy with it. 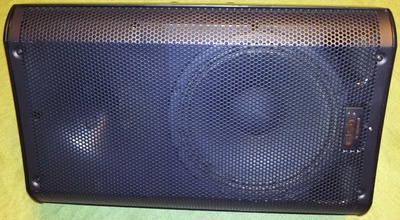 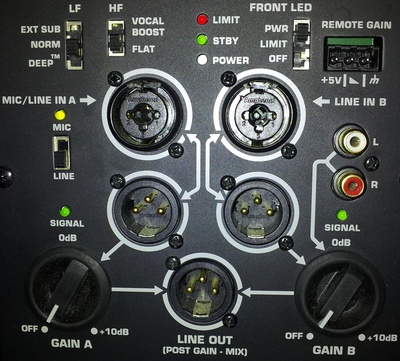 I vacillated a while on whether I really wanted to get a full system, and then in early march with several gigs coming up I decided to buy the rest. For a mixer I got a used eight xlr-input spirit folio, which I made a case for: 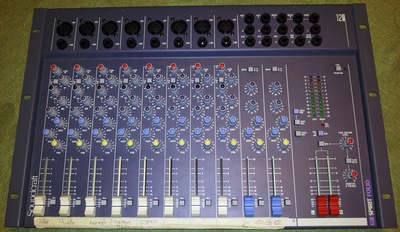 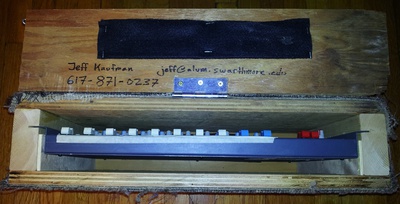 There are many design decisions I don't like about the mixer:

Even with all these issues, I'm quite happy with it. It was cheap, does what I want, and sounds fine. I especially like that it has eight xlr inputs. Most of the things I'm amplifying are xlr, and most medium sized mixers top out at six xlr.

I bought two sm57s for microphones. They're suitable for most things and are quite sturdy and reliable. They've done well so far. I already had an sm58 clone with clip. So I needed to buy three stands and two more clips. I got a speaker stand at the same time: 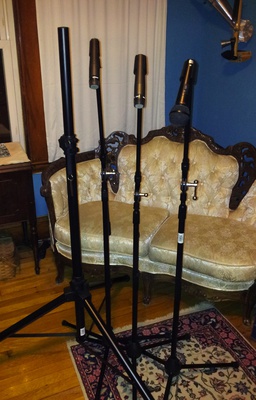 To cut down on the hassle of carrying large numbers of awkward stands that constantly want to unfold, I made some cases: 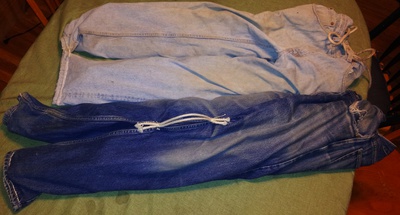 I needed at least three XLRs to connect mics to the board and a TRS cable to connect the mixer to the mains. I got one extra XLR as a spare. Some sound engineers wouldn't be caught dead with cables any color other than black, but I'm not one of them. Colored cables make it easier to tell what's connected to what, and contra dance is not a setting where it matters. 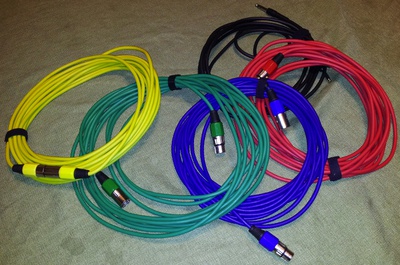 At this point I had what I'd consider to be about the most minimal system you could play a dance with. As someone who plays a quiet instrument, however, monitors are really important. So after a few less than optimal dances I got a Mackie srm150: 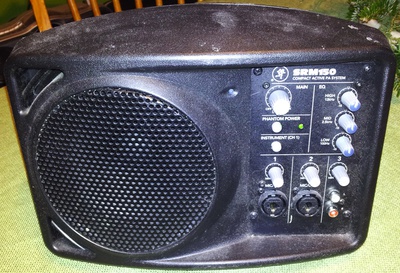 It does well, even with keyboard's bass. The only thing that bugs me is that the 'power' LED takes several minutes to turn off after you turn it off. This might be useful to a technician trying who wants to know if it's safe to open it up to work on, but it is unhelpful to me trying to see if I've remembered to unplug it. It would also be nice if you could sit it at multiple angles on the ground. The K10 can sit on the floor at two different upward-pointing angles, and I really like that when using it as a monitor wedge.

With both the srm150 and the K10 I like the flexibility of having multiple inputs, support for both XLR and TRS, input gain controls, and the settings to run mic preamps. I don't use any of them in my normal setup, but it means I have more "limp home" options, as Walter Lenk calls it: if something breaks, there are many ways I can partially reconfigure the system to get something working a little.

Costs in a table:

With this system I've run sound at eleven dances, which comes to $100/dance. Everything is still in good condition, so I expect to eventually break even on the whole thing. [4] It all lives behind and under the love-seat we found in the trash: 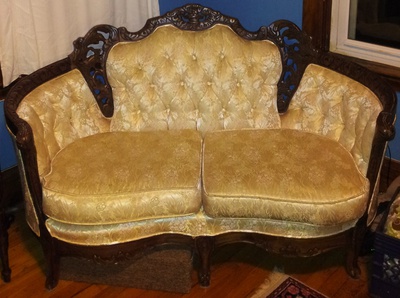 [1] I think the worst was the first dance we played at Brandeis on 2010-10-09. We had very low powered multi-input PA from the college, a borrowed keyboard with a hefty keyboard amp, and two borrowed mics with stands and cables. Tony Parkes was calling, and brought a wireless mic. We ran the fiddle and caller over the PA and the keyboard over its amp. We put the keyboard amp behind the keyboard so Amy could hear herself. When we put the mandolin over the PA, none of us could hear it, but when we put it over the keyboard amp we got feedback. We ended up using awkward angles to mostly shield the mandolin mic from the feedback, but none of us could really hear each other, and I couldn't hear myself. Adjusting levels meant adjusting the input knobs on the PA and keyboard amp. This was not fun.

[2] I wonder how hard it would be to modify the one I have to make the aux2 be pre-fader. The wiring diagram looks very simple: 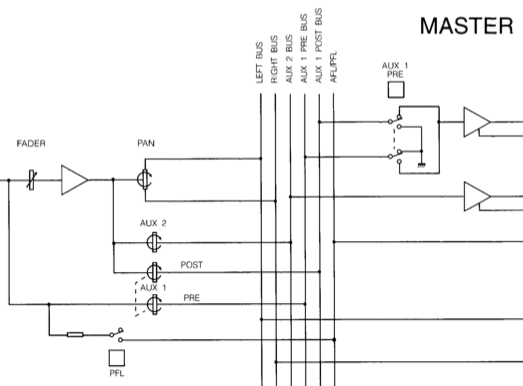 I think I would just need to move the aux2 bus connection from after the fader to before. But this might be a lot harder in metal than it looks on paper.

Update 2013-06-06: I tried making this change, about a year ago, and wasn't able to. Just because the block diagram looks simple doesn't mean that the circuit board will make sense or be easy to modify.

[3] This was a birthday present, which I paid part of.

[4] I recently got a second K10 [5] with stand, a shure bg4.3 with clip and stand [5], and some backup cables, adapters, and cable ties. This adds about half again to my breakeven time, but means I have the equipment to run sound for larger dances, like BIDA. Also, velcro cable ties are awesome.