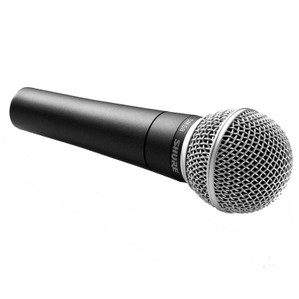 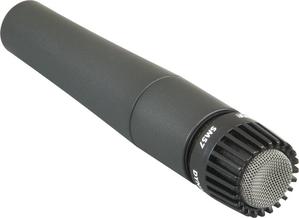 Sometimes people will have mics that are fancier, and sometimes they will have cheap clones, but they generally look and act like these mics. The difference between them is that the sm58 (vocal) mic has more of a windscreen (and looks like an ice cream cone because of it). This windscreen is because singers (and callers) expel a lot of air, and without it you would hear more of this air movement noise. A fiddle doesn't move much air towards it or away; it just sends out vibrations. So then the sm57 (instrument) mic is fine and doesn't need the extra protection. Wind instruments are like singers in that they move air, so they need a vocal mic. Nothing really 'needs' an instrument mic, because the windscreen doesn't really hurt anything, but they are cheaper and work well for many instruments, so they are also common.

The pattern of what these mics pick up is called "cardiod" because someone once thought it looked like a heart. It looks like this: 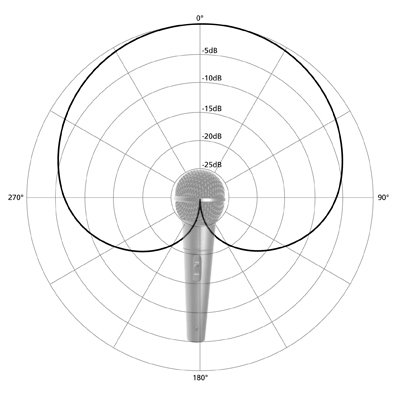 Microphones are generally put on stands so that we can get them exactly where we need them. Nowadays, nearly all stands are the fold up kind, with a three legs and a 'boom'. They look like this: 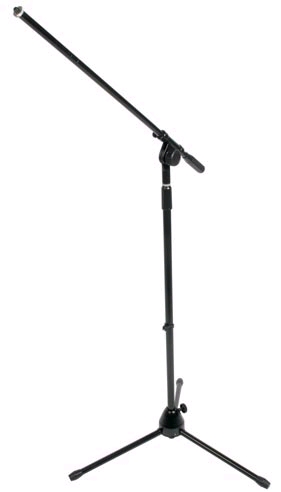 To adjust these stands, you losen the knob at the relevant joint, move them to the position you want, then tighten the knob again. While you can reposition them without loosening first, that's not so good for them.

The mic attaches to the stand with a mic clip. These screw on to the end of the stand, and then hold the mic. They look like this:

For most instruments you want to put the mic as close to the instrument as you can, but out of range of where the musician will bump it. Generally this is either about six inches away or one inch. For quiet instruments, like the mandolin, the mic tends to need to go right next to the body of the instrument, and the player needs to learn how not to bump it. If the instrument has sound coming out of multiple places you need to put the mic farther away or use more mics. For example on a clarinet, the distance from the top hole to the bottom is about a foot and a half. The sound comes mostly from the highest hole that is open. If you were to put the mic an inch away from the middle, then some notes (the ones using holes in the middle) would sound much louder than the others. Luckily these instruments tend to be pretty loud, so in putting the mic a little farther away we don't get in too much other noise compared to the amount of signal coming from the instrument.

For most instruments the whole body of the instrument vibrates, which means you can point the mic at nearly any party of it and get some musical signal. The sound you hear when it's played acoustically is a combination of the sounds let off by different parts of the body. Putting the mic two feet away, to capture all these diverse sounds, doesn't work because there is so much other noise in a dance hall. So you need to find a bit of the instrument that sounds good when it's the only bit people will hear. This is hard, and varies by instrument. One way is to try moving your ear around close to it, because what your ear hears is what the mic will pick up. Another possibility is that some musicians know where they like their mic. Ideally all musician who play with mics would know where best on their instrument to put the mic, but few do. [2]

Mics connect to the board with XLR cables. They look like this: 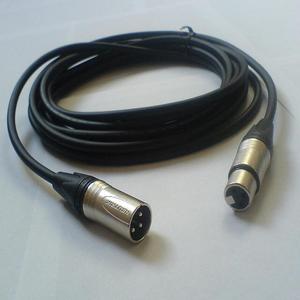 Try not to run them where they will be in the way. They connect up to the mixer.

[1] This is a bit of a simplification. Ideally, a band needs only microphones and XLR connections. Unfortunately, there are two cases where they might be expecting more from the sound person. It is good to talk in advance about sound needs, becuse there are some things like this where it's not really standardized whose responsibility they are. The first is 'phantom power'. If the musician has a pickup on their instrument, it might be very weak and need an external power source to get it loud enough to use. It turns out that XLR cables can be used not only to transmit the very low power signal from the instrument to the board, but also a much higher power signal from the board to the instrument. This huge difference in power is actually kind of a problem, because if a cable is going bad or a connection isn't great then phantom power can make for very loud crackles when the strong power signal is briefly mixed up with the weak musical signal. Not all boards can provide phantom power, but newer ones usually can. Ideally you would only turn phantom power on for instruments that required it, reducing your risk of crackles, but many boards can only turn phantom power on for all inputs at once.

The other thing a band might do is have an instrument like an electric guitar or bass where you have a 1/4 inch connection that's intended for an amp. The traditional thing to do is have them bring their own amp, and then point a microphone at the amp. This works well, because the musician sounds just like they do when they are practicing and they can hear themselves without relying on the monitor. If they don't bring an amp, you might be tempted to just plug them right into the mixer -- mixers have 1/4 inch inputs, right? This will usually work, but will sound really bad because of something called an 'impedance mismatch', which I don't understand. What works is to use something called a DI box which can take the instrument input on a 1/4 inch cable and give you an XLR output that's right for going into the board.

[2] If you are a musician, it is good to practice sometimes with a mic. Find a microphone, stand, and amplifier/speaker. Turn it up loud enough that you mostly hear from the speaker instead of your instrument. Then try moving the mic to different parts of the instrument to see which place has the best sound. If your instrument is loud enough that you can't hear the monitor, you could try enlisting a friend or possibly recording yourself and then playing it back.

This is also a good time to practice adjusting your distance from the mic. Many instruments do some things that are loud and others that are quiet. When I play mandolin the melody is much quieter than the chords. You can maintain a consistent distance from the mic, but only if this large difference in sound level between the different things you do is what you want. In my case I'll pull back from one inch on melody to about three inches away for chords, but you can figure out the right amount for you by listening to how you sound through the monitor. If you have multiple instruments you play through the same mic do this too; figure out how far away to be with each of them. If you sound check on a mic playing flute and then partway through a dance switch to trumpet without pulling way back, the sound person will kill you.