The New York Times has a calculator to explain how getting on a jury works. They have a slider at the top indicating how likely each of the two lawyers think you are to side with them, and as you answer questions it moves around. For example, if you select that your occupation is "blue collar" then it says "more likely to side with plaintiff" while "white collar" gives "more likely to side with defendant". As you give it more information the pointer labeled "you" slides back and forth, representing the lawyers' ongoing revision of their estimates of you. Let's see what this looks like. 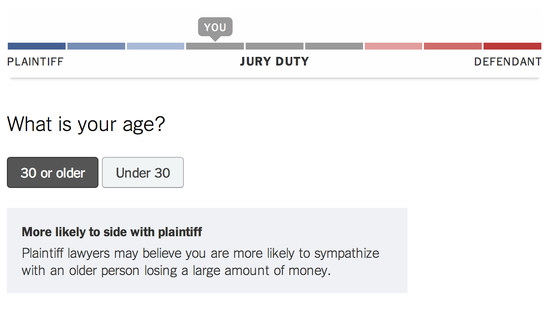 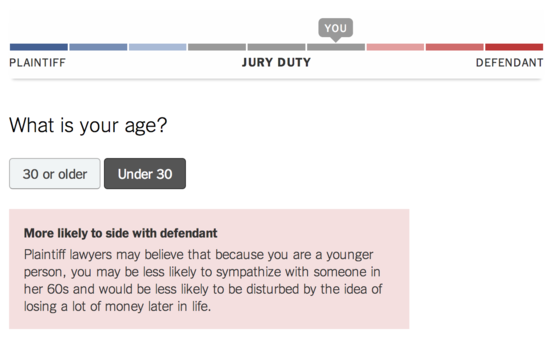 For several other questions, however, the options aren't matched. If your household income is under $50k then it will give you "more likely to side with plaintiff" while if it's over $50k then it will say "no effect on either lawyer". This is not how conservation of expected evidence works: if learning something pushes you in one direction, then learning its opposite has to push you in the other.

Let's try this with some numbers. Say people's leanings are:

Before asking you your income the lawyers' best guess is you're equally likely to be earning >$50k as <$50k because $50k's the median [1]. This means they'd guess you're 60% likely to side with the plaintiff: half the people in your position earn over >$50k and will be approximately evenly split while the other half of people who could be in your position earn under <$50k and would favor the plaintiff 70-30, and averaging these two cases gives us 60%.

So the lawyers best guess for you is that you're at 60%, and then they ask the question. If you say ">$50k" then they update their estimate for you down to 50%, if you say "<$50k" they update it up to 70%. "No effect on either lawyer" can't be an option here unless the question gives no information.