Six years ago Julia and I took the bus down to NYC with a group from the Boston LessWrong meetup. We were headed to a Solstice celebration and 'megameetup' Ray was organizing. It was a good weekend: lots of talking to people I'd only met online, various proto-EA conversations, friendly and relaxed atmosphere. The Solstice itself was in a crowded living room, and I remember playing guitar for Uplift, Thanksgiving Eve, and God Wrote the Sky. This was the second NYC Solstice, the first one being in 2011, and it was still a cosy event. 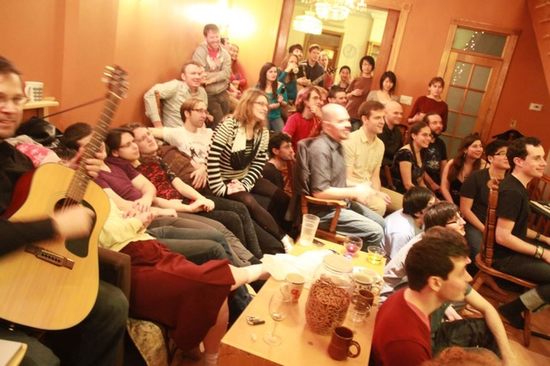 We went again the next year, for the first big Solstice. There was a Kickstarter, it was a beautiful hall, full band of professional musicians. Good in a different way, still a really nice time to see friends and get together.

A week later we held the first Boston Solstice, in a friend's house, with basically no rehearsal. It was fun and silly, and I really liked it.

Boston also moved on to a larger event, in the MIT Chapel, for the following years, and while I enjoyed helping out with the music I missed the feeling of a smaller event.

As the long-term drift to the Bay has continued, it's time for Boston to go back to having a smaller, more casual, more communal Solstice. This year I'm planning to host one at our house, centered mostly around group singing, with a few readings. Ray's original vision had a large emotional arc, from happy and silly, to serious and solemn, to joyful and triumphant, anchored by a dark and meaningful speech, but the theatric intensity necessary for this isn't the sort of thing I'm up for. The idea is we'll still have a general arc to the evening, with some central darkness bookended by lighter pieces, but it won't be as quasi-spiritual/deep as people might be used to from other events.

So: if this still sounds like something you would enjoy, save the date: Friday December 21st.

(Reading past Solstice discussion the differing expectations around kids are tricky. If you want something to be a community event, since kids and parents are part of the community you need to figure out how that's going to work. My current plan is for the kids to be around for the initial joyful section, which is the part they're likely to be most interested in, and then do rotating volunteer childcare upstairs for when kids stop being interested in the singing. If you're thinking of coming and bringing kids, let me know so we can coordinate!)