I've been keeping a Boston-area rent map since early 2013, which means I can look some at how apartment prices have changed over time. A rough way to do this is just to look at how listings have changed, tracking the average price for each size unit over the last five years: 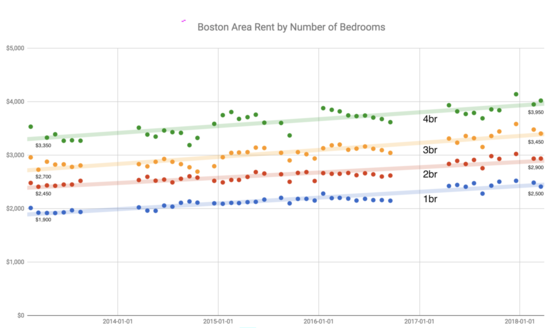 Another way to look at the same data is to figure an annual growth rate. I see:

Different areas probably appreciated differently, though. Restricting to just two-bedroom units, the most frequent kind, here's an interactive view: yearly boston apartment prices. Or, if you prefer, a gif: [1]

One thing you can see with these maps, compared to last time is that I'm now using the "magma" color scheme instead of a rainbow. With a rainbow some color divisions are artificially salient, like the green-yellow boundary, while "magma" and other perceptually consistent systems are uniform across their range.

I also was curious about how relative prices had changed over the past five years. Are some areas becoming more expensive (popular) relative to the rest of Boston? I've made another set of maps, these ones scaled by the average price for each year, so they're colored by whether areas are 0.5x - 2.0x of the mean for the whole map. You can see this as another map overlay or as a gif:

[1] This is similar to what I did last time. One change is that I needed -background black -alpha background -alpha off instead of -alpha off -fill black -draw 'color 0,0 replace', I think because of the new color scheme. I also moved the label in the corner to after the compositing, so it wouldn't be artificially darkened, and I made it larger. The new commands are:

Once I had all the files, I put them together in a gif. I repeated the last file twice so it would stick around longer; I don't know if there's a better way to represent this in a gif:
←
BIDA Family Dance Timing Communicating about contra dance sound
→