[EDIT: all set now! They found someone.]

A friend of mine has been bootstrapping a business-to-business software-as-a-service startup that's seeing serious growth. It needs someone who can put dedicated effort into scaling it, but my friend is near the end of their career and looking to retire. What do people do in this situation?

More details: they were running a traditional labor-limited small business and they automated some of the work. This automation was a huge improvement and they realized it could be useful to other companies. In early 2019 they had a web app ready and started taking external customers. In late 2020 they started to see serious growth, which has continued. They let me share some numbers: 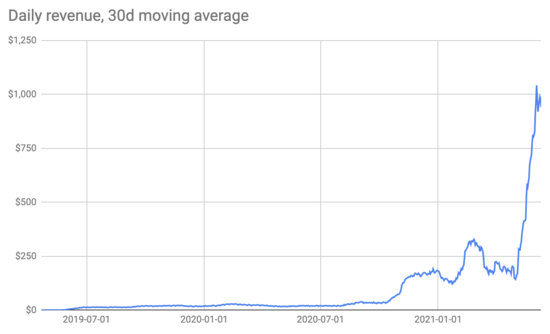 They have ~50 customers, and churn is essentially zero: they have only had one customer leave, and that was because that customer lost the contract they were using the service for. Their customers are really happy: the service is very reasonably priced given the large amount of work it saves. My friend estimates that they are at under 1% of their potential customers with the current offering, has ideas for several other things they could offer, and doesn't know of any competitors.

It looks to me like it's uncommon for someone to sell a business at this stage: typically a founder would at least stay through the hyper-growth phase. Unfortunately, my friend is not able to give the company the attention it deserves, and it could grow much more effectively under management that wants to be running a fast-growing startup.

I don't know what makes sense here. Possibly someone who is thinking of founding a startup might instead be interested in buying this one? I don't know if there's some thing where you buy a company with its own stock, vesting over some number of years? This would be a very good situation compared to most tech startups: they have product-market fit, customers love it, they're profitable, and they're seeing excellent growth. Alternatively, perhaps there are companies that buy businesses like these and run them? Does anyone have experience with something like this?

←
To the Robobassinet and Progress Walking to School
→