Note: in retrospect Lily and Anna were bored a lot and report they didn't like this.

We've been very lucky with childcare this pandemic. We had an au pair, so when schools closed suddenly on a Wednesday in early March we had live-in child care for Lily (6y) and Anna (4y). Having our children well taken care of without risking exposure outside the home or requiring either of the parents to take time off work has been incredibly helpful. Going into winter, with restrictions still in full, however, our au pair was not interested in renewing for another year.

We were again lucky, and one of our housemates has been available to watch the kids three days a week. They're really great, and the kids are having a good time, but this does leave two days a week without care. We decided to draw on some of the independence we've been cultivating, and I talked to the kids about how they would be watching themselves two days a week.

Over the next few weeks the kids and I worked through some plans. We went over their day, talking through the different places where they currently rely on adults, and we figured out how we were going to handle each one. Some examples:

Yesterday I tracked what I ended up needing to do during work, both planned (feeding them lunch) and unplanned (buzzer presses). I started work at 8:40am, and Julia took the kids at 5:30pm. 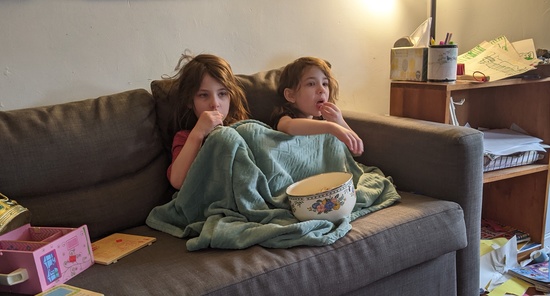 This is pretty typical except for more Zoom issues than usual and the kids not wanting to go outside. This level of interruption doesn't bother me, though I think it might bother someone whose attention worked differently more?

Some of this working as well as it does likely comes from our parenting approach, while other aspects are more likely us being lucky in which particular kids we happen to have. It's hard to tell what the balance is.

I'm glad this is not our situation all week long, and there are lots of things that our housemate does with them that I'm happy they get to do. I so also think, however, that having some time when they are (in their minds) fully responsible for themselves is likely good for them.