If you want to know how walkable various parts of the country are, and you only have (1) the census and (2) walk scores for DC, what could you do? Well, you could look for census variables that correlate with walk scores in DC and then extrapolate these correlations to the rest of the country to get a national map: 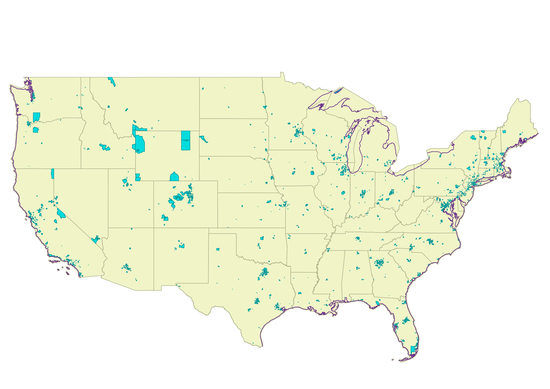 This is pretty cool! But let's have a look at these correlations:

The first thing that jumps out is that I really wish they had run a round of principal component analysis to cut down the number of variables. Many of these are probably just multiple ways of saying the same thing: What I'm saying is that if you ran PCA to look for correlations between these different variables, I strongly suspect you'd find that after taking into account new variables representing employment, population, age, and commuting the remaining related variables would provide very little additional information. But I don't have easy access to the raw data, so I'll be lazy and just approximate this by taking the variable in each category with the strongest correlation and just keeping that one. (We would expect that after PCA our new super-variables would have a bit better correlation, but still it would be about like this.): Some of these variables, like people walking to work or whether houses were built before cars became popular, do seem very likely to correlate with walkability wherever you are in the country. On the other hand, most of the other variable instead look to me like they're measuring "who in DC lives in walkable areas". We see a bunch of employed college-educated young people from out of state living together. I can totally believe that the more like that someone is the more they're likely to value walkability in choosing where to live, and the more likely they are to be able to afford it. But if we're trying to identify walkable areas in the rest of the country this is going to miss out on a lot of other ways a place can be walkable.

This actually surprises the author somewhat; after taking affordability into account and seeing what places had the best combination of walkability and affordabilty by their metric they wrote:

I was expecting something like a smaller, affordable Midwest town or something, but it the highest scoring areas were usually just outside of major downtown

(On the other hand, this might actually be a better metric for the author's purposes. They're really trying to figure out where they would enjoy living, and they think they want walkable neighborhoods. But having a lot of people 25-35 and a lot of strangers living together, along with high employment and education, are probably also things they care about. A retirement community in rural Tennessee might be both very walkable but it's probably not what they had in mind.)