Can you really convince people to be vegetarian for $11 per vegetarian year? One reason for rejecting the argument that you should consider getting other people to go vegetarian instead of doing it yourself is that this $11 number is much too low. So is it?

It's not a matter of paying individual people to give up meat. Instead show facebook ads to American teenagers:

When someone clicks on an ad you're charged ~15¢ and they're taken to a page like this one: 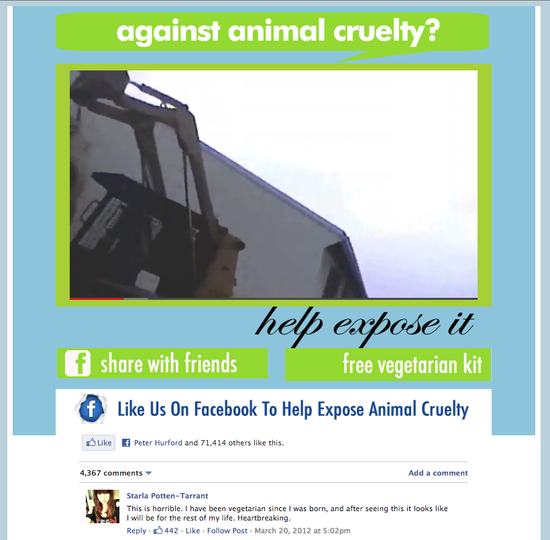 The video starts playing automatically ("in the next few minutes you will be given an eye opening look behind the closed doors of modern farms, hatcheries, and slaughter plants, revealing ...). Below the video there are facebook comments. Sorting by "reverse chronological" to get a typical selection instead of heavily 'liked' comments: 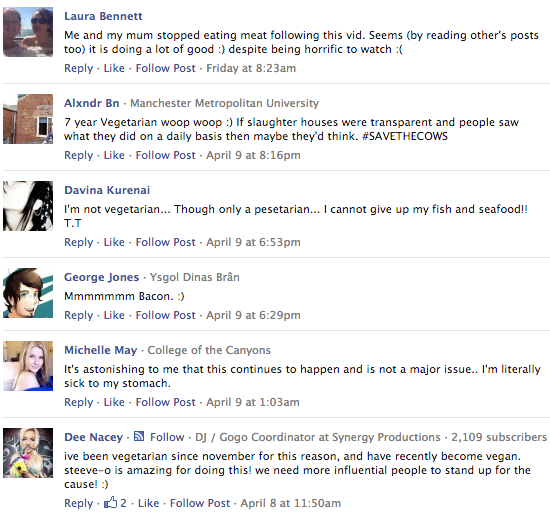 These comments do suggest that some people are changing their eating habits, but how common is that? The problem is, you have no way of observing the change in eating habits of a random sample of the people who come to the site. The best you can do is place more ads targeted at the 7% of people who clicked "like" and became a fan of the page. Then if they click through back to your site you can give them a survey.

Nick Cooney of the Humane League ran this survey and made the data public. [1] Through ads offering a chance of movie tickets and making no mention of vegetarianism they got 45 of their approximately 20K 'like'ers to click through to a survey, and they report that 44 of them completed it. (As I noted before, 44 out of 45 is suspiciously high.) Of these 44 people, 13 reported giving up meat. These is probably an over-estimate, however, because the survey made it pretty clear what the experimenters wanted to hear:

Since visiting the HiddenFaceOfFood.com [2] website, how has your consumption of the following foods:

(It would be much better to run this in a much less transparent way. No affiliation, just looking like some random company's survey so people would have been much less pushed towards saying that they had given up meat. You could put in "are you a vegetarian" and "if so, when did you start?" as long as you surrounded it with enough unrelated junk. Host it on one of the many survey sites out there and not an an animal-related domain. A sample size of 44 is also extremely small. This is online advertising, clicks cost cents, why ask so few people?)

But what if we're just measuring a drift in composition of a relatively fixed size group of teenage vegetarians? Imagine for the moment that visiting the page has exactly zero effect on your eating habits but that the survey is completely trustworthy. Of the 7% of people who liked the page, 1/4 became vegetarian (2% of the total), and invisibly another 2% of the total drifted away from vegetarianism. How would we catch this? We could do something like:

I think this gives us good data. Do you see remaining problems?


[1] I've looked at this data twice before: general analysis, sample bias. Both for simplicity and because I trust it much less I'm ignoring the "vegetarian starter kit" component to focus on the facebook component.

[3] Ideally this would be "months" or "years" later, but cookies don't stay around that long.

←
Measuring Veg Conversion By Comments Pay other people to go vegetarian for you?
→