A little over four months ago I collected some data on how often people were wearing masks. Somerville still requires masks, cases are up, there is now a state-wide order, and I again found myself with some time during which I could take some notes. These numbers are not completely comparable: last time I tracked on a Sunday, this time a Saturday; last time I counted from 9:41am to 10:21am, this time 9:22am to 9:54am. Still, these should be pretty similar samples of behavior here. 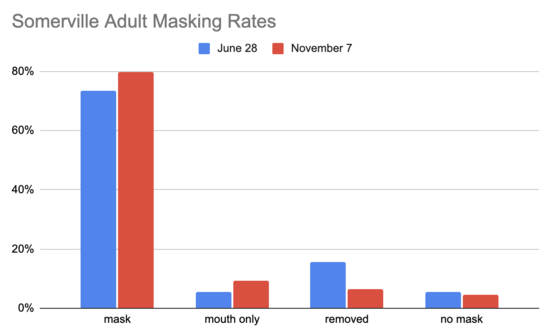 It looks like masking rates are up! Additionally, some people with masks on their chin would pull them up over their nose and mouth when passing people, but I counted everyone based on their masking status as they passed a particular mostly dead tree in front of me: 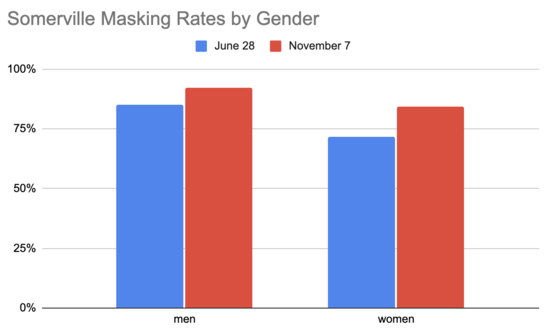 Outdoors is still relatively safe, even without masks, since ventilation is so rapid, but the bike path is relatively crowded as outdoor places go. I'd be more interested in a comparison of grocery store numbers, but I haven't been inside a store since March and so am not in a good position to check.

←
Yes to Feature Requests, No to Entitlement Teach People to Recognize the Sound of Covid?
→