Two months ago, Somerville made facecoverings mandatory, both indoors and out. A few weeks later the state of Massachusetts required them "in public places where social distancing is not possible". A week ago Somerville reduced its requirements in light of the heat: "during the summer months, when you are outside and able to social distance at least six feet from others, you may temporarily remove your face covering but must put it back on when others are nearby."

I was curious what people were actually doing, so while Anna was playing in the "woods" along the edge of the bike path, I gathered some statistics. As each person passed along the path, I tracked mode of transportation (walk, run, bike, scooter/skateboard), apparent gender (female, male, child, unclear), and face covering status (covered, mouth only, removed, absent). Raw data is here. 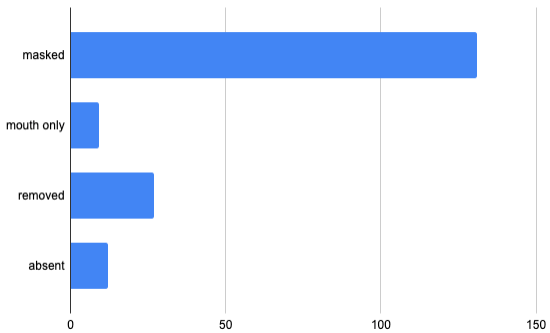 With a person passing every 13 seconds, the path was a pretty crowded place. I only very rarely saw people putting on their masks, however, when coming close to others. For the analysis below I want to talk about people as being masked or not, and people with masks removed wouldn't qualify. Masks worn mouth-only are less clear, but since a large fraction of transmission seems to be via talking and coughing, I decided to count someone as masked if their mouth was covered, even if their nose was sticking out. 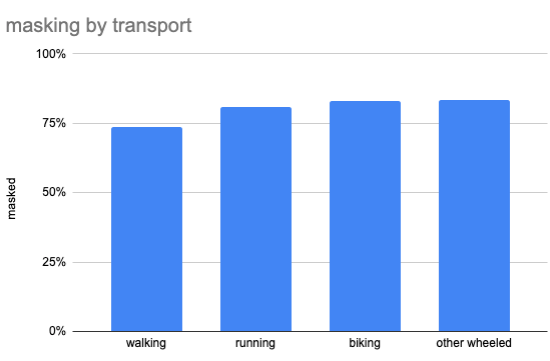 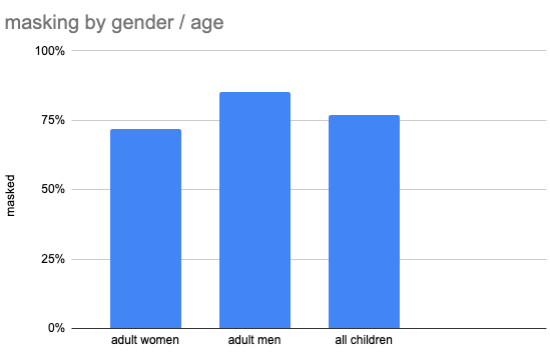 I'm curious what numbers look like in other areas. Talking impressions with friends, it sounds like this is a higher fraction of people wearing masks than in most places?


[1] I categorized people by apparent gender, and one person didn't read immediately as male or female.