I wanted to understand how the number of housing units in Somerville had changed over our history, but wasn't able to find anything searching online. We can get an estimate, however, by looking at the "Year Built" field in the Assessor's Database. This shows the age of Somerville's current housing stock, to the best estimate of the Assessor. 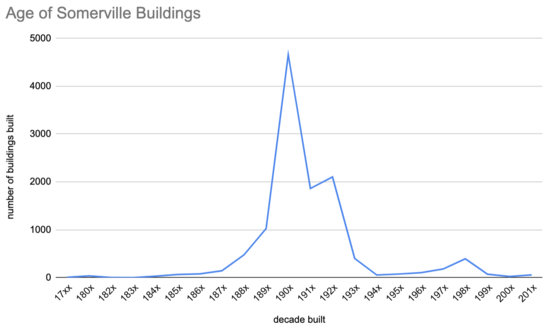 In estimating how much building was happening in various decades this will be biased towards the present: a building that was demolished and replaced will show up as being built recently, replacing the earlier older listing. On the other hand, newer projects are often larger, as former industrial sites are converted to housing. Still, it shows that current building levels in Somerville, while higher than in the 2000s, are still very low by historical standards.