A few years ago I wrote about how I'd been playing a simplified version of Carcassonne with Lily. We stopped for a while, but recently we've played simplified versions of Ticket to Ride, Race for the Galaxy, Guillotine, and Settlers of Catan. My general approach here is to find a core piece of the game that will be fun on its own, and then add to it as Lily wants more complexity.

While the particulars of the rules don't really matter very much, some examples to explain how we're approaching it:

In Race for the Galaxy, the core mechanic is playing cards. In our first game you would play cards, both settlements and developments, by discarding other cards. Something with a "2" in the corner meant discarding two cards. At the end of each turn you would draw back up to five, which is nothing like the original game. The winner was the person who ended up having played cards with the greatest cost.

When she wanted to make it more complicated, we started using the victory point value of cards instead of their cost, and each time you played a card you read the number in the hexagonal box and placed that many victory point chips on it. Later we'll probably be able to stop putting the chips on it, but having physical chips to manipulate and count makes scoring easier. 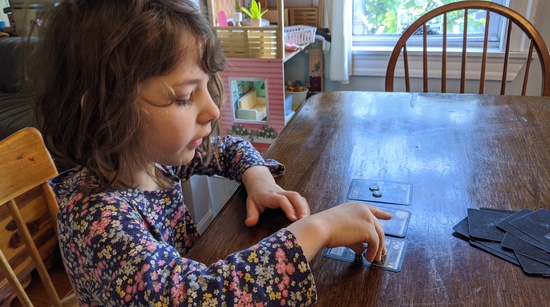 In Ticket to Ride, the core mechanic is drawing cards and playing trains. We each got a route card of the same point value, found our cities on the map, with the card for reference, and marked them so we wouldn't lose them. The first time we played, on your turn you placed a single train car. The goal was to be the first one to connect your two cities. This went very quickly, and just taught placement and a bit of pathfinding.

For the second game I introduced train cards. Now if you wanted to place a train you needed to pick up an appropriately colored card. You didn't build up a hand, just picked and placed right away. They did need to be the right color. If no card worked for you, you could use your turn to replace the available cards with five new ones. We played that only kids could pick up locomotives (wild cards), which Lily got very excited about. 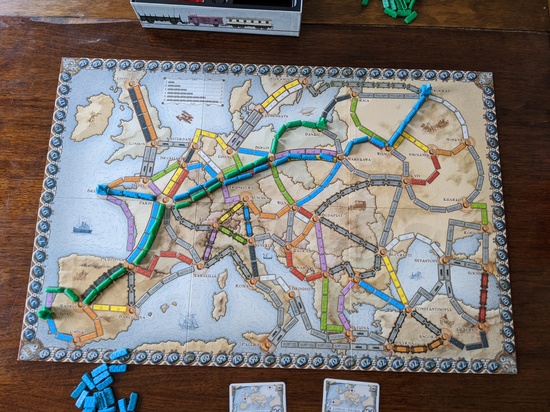 In Guillotine the core mechanic is collecting nobles. Our first time playing we would just each collect the noble at the head of the line every time, which was not very exciting but taught the mechanic. Next we added cards, and while I would need to read the cards to her, she learned which cards were which pretty quickly from the pictures. After a few rounds of adding things we're up to the full game, though it's also the simplest of the games here.

The first time we played she was a bit unsettled by the theme, but didn't think about it very long and now it doesn't bother her.

When we wanted to play Settlers of Catan, I laid out a simplified 7-piece board: a water tile in the middle, five resource tiles around it, and the desert. We would roll a single die, and the person who rolled got the appropriate resource. If you rolled the desert one, that was the robber, and then if your opponent had more than seven cards you got half of them.

Initially, the game was only collecting resources and building things for points, but the things you built didn't actually do anything. When we wanted to make it more complicated, we made it so as you built settlements and cities they started producing goods for the places they were on. This made it so setup was a little bit more complicated, because if wood and brick, or stone and wheat, were next to each other, settling their intersection was just much too powerful. Later we added trading with the bank, and we added ports. Though, again, this need is to not be random because having a port right next to the same kind of resource was too powerful. Most recently we added development cards and moving the robber.

Overall, I like this approach much more than games that are designed specifically for kids because kids learn really quickly and any single game is probably going to be too hard for them at the beginning or quickly become much too easy for them. Being able to keep expanding the game so that it stays fun and challenging and eventually approaches a full game.