We had another outdoor contra dance in davis square last night. Good turnout, plenty of musicians. Only two callers, though. Pretty hard on the voice to just have two of us taking turns. I did get two people in for some redundant volunteer calling, though, and maybe they'll be up for calling dances solo after a few more times. 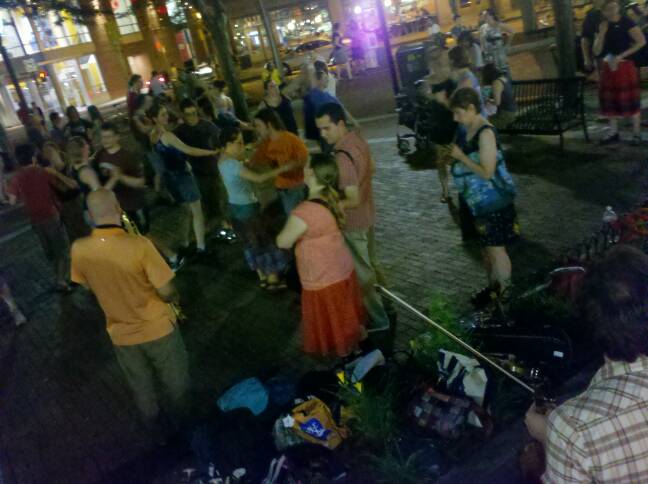 At one point I started teaching heartbeat contra, and got most of the way through before people started shouting that we'd already done it. Whoops. Then I was flustered and picked out a dance *almost* identical to one we'd already done: thursday night special #1 when we'd done the nice combination earlier.

I also need to find more dances that are good for this sort of thing. This time there were a lot of beginners, which is great, but this meant I didn't want to try to teach the hey, which ruled out a bunch of dances I've been able to call previous times. Good dances for an outdoor unamplified dance need to be rapidly learnable and unconfusing, because the caller needs to drop out quickly to save voice. Getting trapped calling a complex dance all the way through is about half as much work on the voice as calling for the whole evening! Dances also need to be simple enough to withstand the extra distractions of being outdoors and the difficulty hearing music and caller in different places. Heys are actually pretty good for this, especially whole heys, as long as the dancers are mostly familiar with them, because you just say "hey" and then can stay quiet for 15 beats. If I can't use them, I can't use them, though. I'll do a better job preparing before the next dance.

I went around handing out mini-flyers at various points. Julia thought we should have them, so she made some. They read:

What are you guys doing?
Contra dance is a traditional social dance from New England. It's
normally done in a large hall with live music.
Where can I find more dancing?
- 3rd Sundays at the Masonic Hall in Porter Square, Cambridge
- Mondays, Thursdays, and many Saturdays at the Scout House in Concord
- 2nd and 4th Saturdays gender-free contra in Jamaica Plain
- Some Tuesdays at MIT
For details on these and more dances:
freeraisins.com/boston       jeff zai freeraisins punto com

I printed them out six to a page and gave away ~15 pages worth, so about 90 flyers. I hope we see some of these people at out other local dances.

I hope to do another one in late july or early august.