On Giving Tuesday, Julia and I donated our millionth dollar to GiveWell's top charities and growing the Effective Altruism movement. It was more dramatic than you might have guessed, since we were trying to donate as close as possible to 8:00:00 to get the FB donation match. 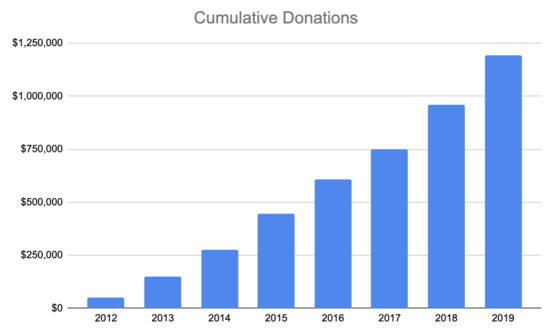 I remember when we were starting out thinking that if we kept at this $1M might be a good lifetime goal; it's really exciting that we've gotten there within ten years! More than that, however, what I really didn't expect was how much of a community there now is around EA. In September 2011 we hosted our first EA meetup; now we're having them about once a month. Most of the universities around us have EA student groups, and some of the students come to our meetups. There are EA conferences, which Julia helps organize, and I went to ones in 2015, 2016, and 2017. The EA Forum has a lot of interesting discussion, and I've met many good friends via talking about EA ideas.

I don't know whether I'll keep earning to give long term. It's a good fit for my situation now, but the question of giving vs doing is still a really important one. So while I'm tempted to set a new long-term goal, I think that would risk pushing a future me towards staying in earning to give even if that started making less sense.