At kevin's suggestion, I decided to visit occupy boston. I arrived partway through the "general assembly", at around 7:30. After a few minutes of simple announcements, such as requests to keep the area clean, there was a proposal to approve a statement [1] from, I think, occupy london. The statement was for "global democracy", and compared powerful international organizations, including the IMF, WTO, UN security council, and multinational banks to mubarak and assad. There were several spanish phrases in the proposal included with translations that didn't really make sense. "Democracia real ya! was translated as "real global democracy now!" and "el pueblo manda y el gobierno obedece" as "the people command and global institutions obey". I didn't say anything, though, because I'm not that sure of my spanish. After an extensive consensus process, the group decided to endorse the statement.

I'm always curious about amplification. They had a single PA speaker and microphone, probably run off a battery, which was being used primarily by the facilitators. When people wanted to speak from the floor they used a repeater system. The person would say "mic check" and everyone who could hear them clearly would loudly repeat "mic check". Then, in short enough segments to easily fit in people's short term memory, they would make their point. After each segment the nearby people would repeat it, bringing the volume up enough for everyone to hear. Probably about 20% of the people that were in a position to be repeaters were actually doing so. Some people were not good about breaking their thoughts up into short enough segments. Other people were very good at it, and seemed to be using the extra time provided by the repetition to carefully compose their thoughts into something eloquent. I didn't do any repetition, except for with one very quiet speaker right next to me, because it felt strange, like I was internalizing the speaker's statements. I suspect it is effective at increasing the cohesiveness of the group.

During the proposal consideration, there was a man next to me who had issues with it. A few nearby people, including me, spoke with him about his concerns. He didn't like that the proposal didn't mention anything about america or the us prison system, that it didn't mention the seven million people who have died over cell phones, that we should not state we were in solidarity with the libyan people because that might have been initiated by nato, and that it needed to mention that the congo was the worst place on earth. I didn't get the idea that he represented mainstream thought, though, and there are crazies in any group.

Talking to some other people, I didn't get much of a clearer picture of their goals. I heard a lot about stuff they didn't like, which was mostly pretty common sense (I don't like corruption either), but not about ways to fix it. I'd hoped I would hear good explanations in person, but in retrospect that was foolish. Julia points out that the writing I see online has been filtered through a bunch of people so I'm mostly seeing good writing, while the people I ask haven't even been through a self selection filter.

I walked around some, looking at the camp. It's very dense, with all but a few walkways and the assembly area being full of tents. Most of the tents looked like they were for living in, but there were also ones marked for media, info, food, library, and others. It all felt very civilized. I found a photo: 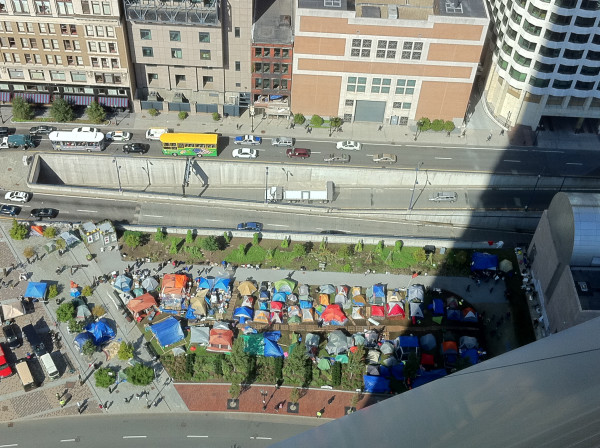 Since the time of the photo (ten days ago) there have been more tents put up. The green area along the top of the photo (the west side of the area) is now all full of tents. It also looked denser than this picture shows, at least in person.

Leaving, I tried to see what the police outside thought. There were three of them: one in a car, one on foot, and one on a bike. They weren't really willing to talk.


[1] There was a request not to publish the statement until october 15th, but it appears to already be online.