I recently read Barbara Morrison's book Innocent about her time as a single mother on welfare raising two children. [1] The welfare office was supposed to help, but it had many policies that made its help much less effective than it should have been. For example, to be eligible for welfare you had to be living in your own apartment. She wanted to live with another mother on welfare to save money, but this was explicitly disallowed. More systemically, the entire program consisted then and consists now of a large number of means tested programs providing specific services. One program for housing (Section 8), food (SNAP), health care (Medicaid), etc. There are a few problems with this:

(1) When you have multiple means tested programs, it can be the case that earning a dollar at a part time job costs more than a dollar in reduced services and increased taxes.

(3) It is based on the idea that the people receiving aid are not the ones best positioned to determine what to spend it on. If you succeed in getting signed up for food stamps, but you have no money for soap or a used slow cooker at the thrift store, you can't choose to spend less on food and more on the other things you need more. Some people will find merchants willing to convert foodstamps to cash at a discount, but this is illegal.

There's not really logic behind this mess, but much of it comes from misguided attempts to save money. "If we gave people cash, they might spend it on alcohol instead of things they really need." Or "if we don't means test then people will get more help than they need." Except that by means testing too aggressively and giving people vouchers only for what we decide they need, we are actively keeping people poor by not letting them keep enough of the additional money they earn. That is not just harmful, but stupid. It would be so much better if we could get people to move from needing (net) assistance to paying (net) taxes. Not just because this would mean that they were wealthier, but we would have more money to spend on other things.

Right now a person with no income is eligible for about $10K in public assistance [2]. This is a decent estimate for what one person needs to live on in this country. Julia and I live on a bit less than this, per person. So let's give everyone, whether they need it or not, $10K per year [3], tax everyone 38%, from their very first dollar earned [4], and get rid of these programs. What does this look like?

In the graph below, I show the implicit marginal tax rate. This is: for each dollar earned at a certain level of income, how much of that dollar do I give up in taxes and by getting less assistance? Brown is the current tax rate (calculated and graphed by mises [5]) and blue is the proposed tax rate: 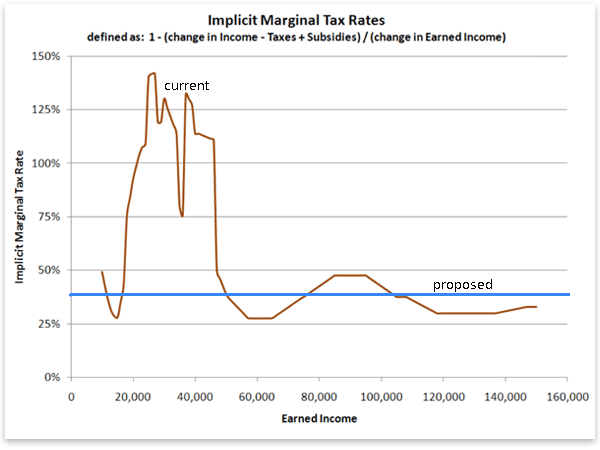 Update 2013-05-19: George found another graph of the marginal tax rate, this one from the statement of C. Eugene Steurele to a subcommittee of the House Ways and Means committee. (pdf, figure 2): 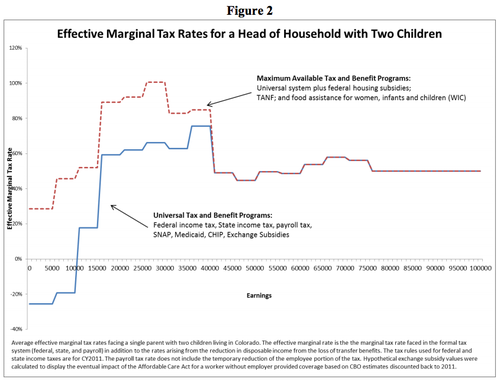 While I haven't looked into the details for how these were calculated, I trust this a bunch more than anything out of the Ludwig von Mises Institute.

Note that the current tax rate has several places where it is over or near 100%. That means that if you're being paid in that range there's small or negative benefit to working more or getting a raise. Now consider how much money you have to keep for yourself, for each level of income (brown is calculated by Mises, black is proposed, all for a hypothetical Virginia family of three): 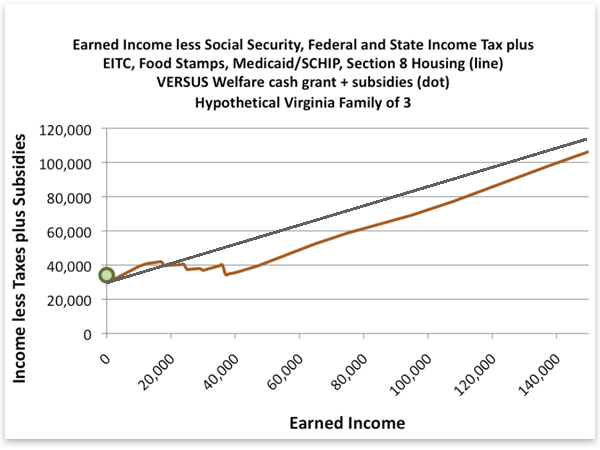 The places where the brown line goes down are places where earning more money would hurt. The line, whatever it is, should really only go up. Also note, there's no free lunch, money has to come from somewhere. Because more people would be getting this money, this would be a redistributive change: we would be taxing the rich more than we were before. You can see this in the graph by seeing that the brown line will cross the black line a little to the right of the graph, at which point those people would have their taxes raised.

This is not a new idea. It dates back to 1962 and Milton Friedman, if not earlier. It's sometimes called a "negative income tax" or a "universal basic income combined with a flat tax (UBI-FIT)". The earned income tax credit, which kind of does this but suffers from excessive means testing when combined with other forms of assistance, was implemented as a watered down version of this. A negative income tax would be only a little more expensive than the current system, and far more effective.

[1] I know Barbara from dancing, and working together on the Pinewoods crew summer 2008.

[2] This varies widely by state.

[3] Implementation matters too: when you get monthly foodstamps and are very poor, it's difficult to ration them to last the month. So you get cyclical buying and hungry ends of the month. Instead you could offer two options: (1) credit cards that got $28 ($10K / 365) added to their balance each day automatically and (2) a weekly $192 ($10K / 52) direct deposit into a bank account. Bonus points for letting people change how often the money came in, from daily to monthly, so that you could choose between money more often and statements that are less cluttered.

[4] The $10K and 38% numbers are my estimates of what it would take to maintain the current level of support for the very poor while bringing in the same amount of revenue overall. This is intended to be a revenue neutral tax change. Tweaking the offset and tax rate changes how much we are supporting poor people and how much earning more is disincentivised.

[5] I don't agree with them on many things politically, but their calculations in this article look fine.

←
How Much Should You Give? Calling With Lights
→