Let's say you're starting a social program. Maybe you want to help people with food, or health insurance, or housing. You have a limited budget, so you want to target the people that most need your help. The most straight-forward way to do this is to set an income threshold, and anyone earning less than that qualifies. So maybe you say anyone who applies who is earning less than $10k will get $2.4k ($200/month) in food assistance.

This does mean you're mostly helping the people who need it, but you've set up weird incentives around your threshold. Someone earning $9.5k gets the $2.4k/year for food, for an effective income of $12k. If they get a raise to $10.5k they lose the food assistance, and their effective income is just $10.5k. Even though they were earning more money, crossing this threshold left them with less: 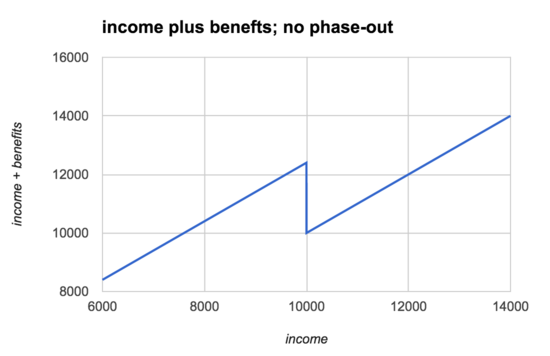 This is reasonably well understood, so instead of sharp cut-offs we generally do phase-outs. So someone earning $7.5k/year gets the full $2.4k in food assistance, and we phase it out linearly so that by the time they're earning $12.5k they're not getting any food assistance. You can think of this like a 48% tax rate: for each $100 you earn you get $48 less for food. There's no point at which you would have been better accepting a lower income. 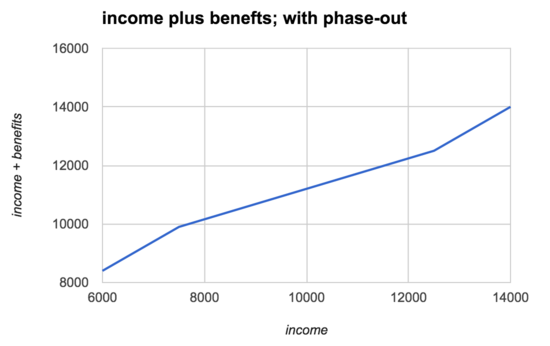 Picking the right rate to phase it out at is tricky. Set it too low and your're spending a lot of money helping people who don't really need it, but set it too high and you're setting up a barrier to earning more. And if you set it over 100% then you're back in the case above where people actually do better if they earn less.

Let's say we figure out that 50% strikes a good balance between targeting the people who most need the help and avoiding incentives that keep poor people poor. So for each additional $100 you earn, you get $50 less in food assistance. And $50 less in health assistance, and $50 less in housing assistance, ... that's not going to work! We have a coordination problem: it's not enough to phase each benefit out at a reasonable rate, they need to coordinate to have an overall rate that's not too high or low.

This coordination isn't something we do well on right now: there are enough different organizations with enough different ways of handling benefits that we've ended up a with an after-tax-and-benefits income that looks like: 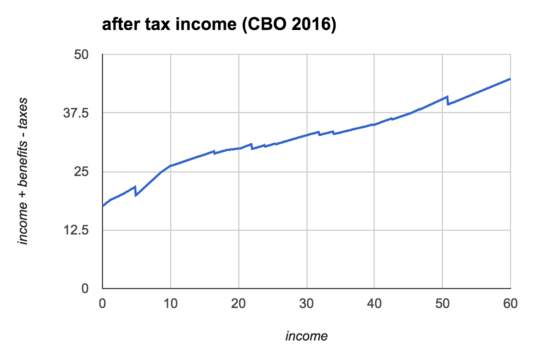 Hypothetical single parent with one child in PA getting the full benefits they're entitled to, from the 2015 CBO Effective Marginal Tax Rates report (pdf).

If someone goes from earning $10k to $40k, their after-tax-and-benefits income goes from $26k to $35k, an effective tax rate of 70%. That's really high! And we're only considering government benefits; take into account other sources of assistance like financial aid for education [1] and it gets even worse.

This is one of the reasons I'm in favor of testing out a universal basic income (UBI) system: give everyone, rich or poor, a basic income and then tax people smoothly as they earn money. Because there's only one kind of assistance to phase out and everyone gets it, it's much easier to make sure you're keeping disincentives to work low at every income level. For example, if we give $10k/adult and $7.5k/child and tax income at 50%, [2][3] then we would see: 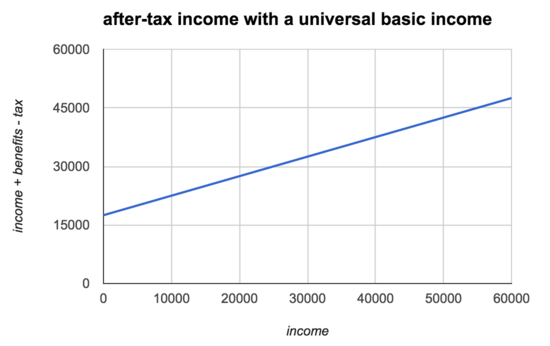 
[1] Promising to meet 100% of demonstrated financial need, as the top colleges do, means promising a 100% effective tax rate.

[2] I'm open to having an effective marginal tax rate that's lower than on low earners than high earners, but whether this is a good idea depends a lot on how people's behavior changes at different marginal tax rates and income levels. 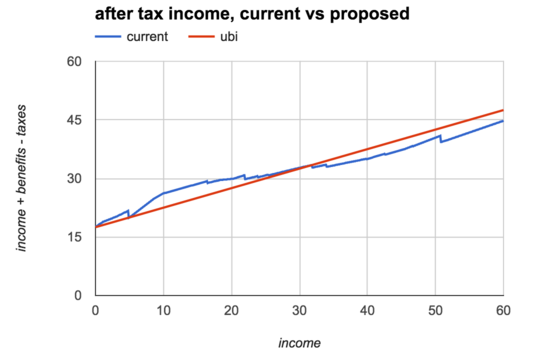 For people earning above $72k, the initial $17.5k stops mattering as much and we're primarily talking about the effect of rasing the top bracket from 39.6% to 50%.

While I'm not generally excited about how this means less money for people in the $5k-$25k range, because the UBI benefit is no-hassle and cash instead of in-kind I think they probably still come out ahead. Raising the top marginal rate to 50% should be enough to compensate for this being more generous on average and for how some people would respond by stopping working, but I haven't even modeled this yet alone run an experiment.