I've been thinking about how sound moves through floors and ceilings, and trying to figure out what to do about a bedroom in our house that gets more noise than we'd like. I wanted a way to compare different floors/ceilings in order to tell how well they were passing sound. Here's what I came up with:

In the room below, I set up my laptop (2017 MacBook Pro 15") with Audacity recording. I made sure ambient noise reduction was turned off, and I set the mic volume to 10%. I put the laptop on a pillow so it only would record vibrations through the air.

In the room above, I dropped a hammer onto a mat from a variety of heights. I used a "16oz" hammer, which weighed 23.9oz including the handle: 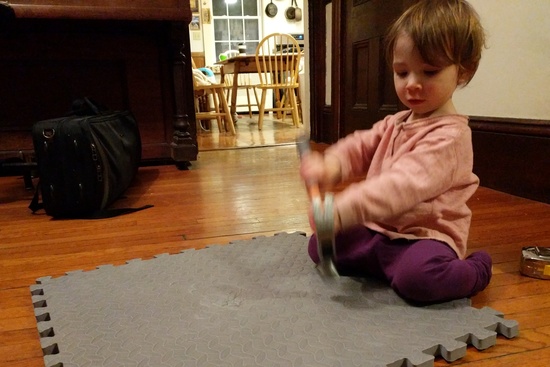 I dropped three times at each height, and after the 6", 12", 24", and 48" drops hit the mat hard three times so I could tell where I was when looking back at the recording. 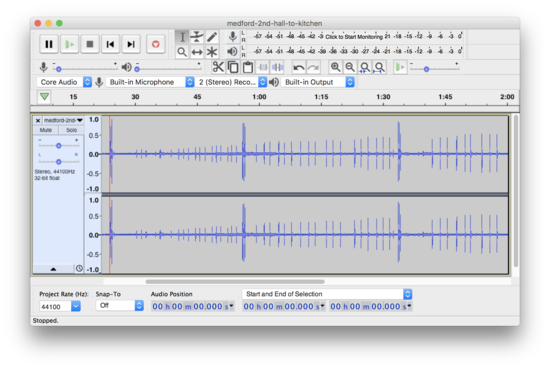 I took samples from a range of places in our house (Somerville) and my dad's house (Medford), three story wood frame houses from 1920 and 1895 respectively.

I went back over the recordings in Audacity and measured the heights of the peaks using the Effect > Amplify tool (which I made a shortcut for) which, as a side-effect, tells you how loud the sample currently is. 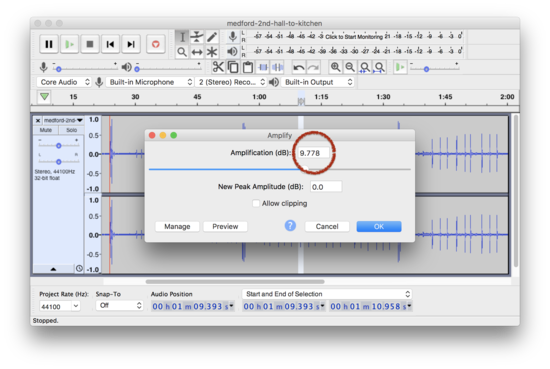 This was a consistent enough process that I think I would get the same results if I repeated it, and I definitely think it's good enough to measure relative rates of sound transmission. It's not calibrated to any external scale, though.

Overall, rooms varied widely in how much sound was transferred: 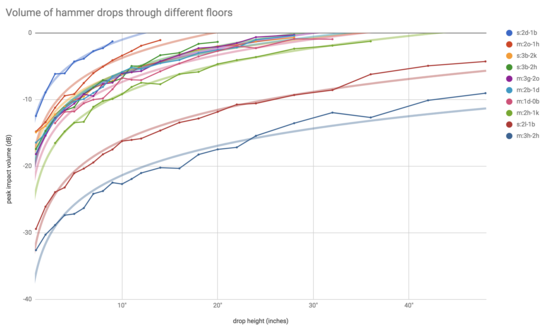 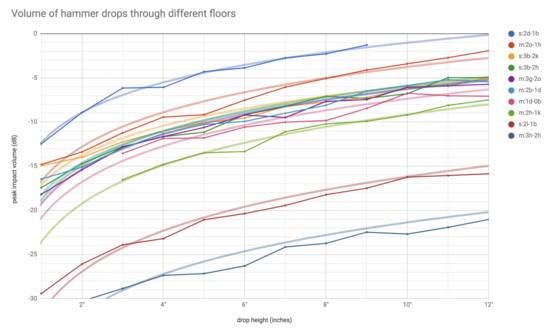 Reading the trendlines off the graph at 6", from worst to best I see: 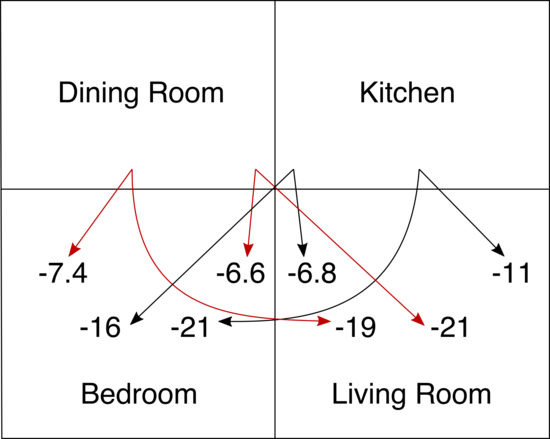 Update 2018-02-24: We decided to redo the first floor bedroom ceiling, and the demolition is done now. The ceiling turned out to be 3/8 drywall, attached to 3/4" strapping. (No silliness with the old wood lathe like there was in the front hall.) I took more 6" measurements. Some of the dining room to bedroom measurements clipped, but it looks to me like Audacity was able to correct for this, and the negative numbers I got from the Amplify tool look like they come from some kind of wave reconstruction? Here's the data, with the data from earlier to compare with. All of these were measured in the 1st floor bedroom:

The two dining room measurements are the most important ones, since that's where things were the worst to begin with. It looks like the old ceiling was getting us about 5.5dB of impact sound reduction. Additionally, speech above is way more audible than it was before the demo.

Update 2018-03-18: Some of the new ceiling is up: the joists have been stiffened with 12" wide strips of 3/4" plywood, there are two layers of 5/8" drywall and green glue screwed to the underside of the subfloor, and there's 6" of fiberglass insulation under that. I took another round of measurements:

This has me optimistic: we still have two layers of 5/8" drywall with green glue hung from RSIC clips to go and we're already better than before we started.

Update 2018-03-19: Since I'm dropping the ceiling by a bit over a foot I was thinking I might as well put in more insulation. I went back and added another 6", bringing the total to 12", and took yet another round of measurements:

This is even better! I think part of what's happening here is that this layer of insulation is able to go under partly under the joists (it's resting on top of the hat channel) while the other was entirely between the joists.