Yesterday people were excited about a map that was supposed to show risk of catching Lyme by county. Unfortunately, it actually measured something complex but correlated, the year in which the county was first designated "high risk". This is interesting, but I wanted the map I'd hoped to find: annual per-capita cases of Lyme. So I made it: 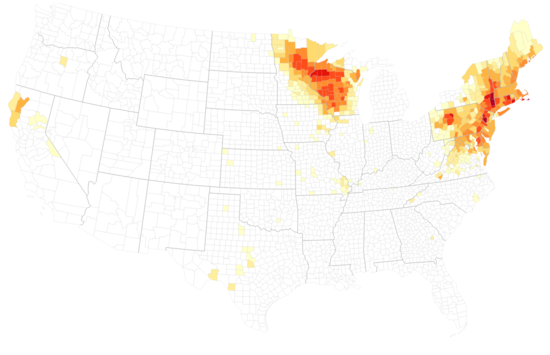 The map is colored by annual "confirmed cases" as reported by the CDC (csv) divided by the Census estimate of the 2012 population (csv) with mild weighting for recency. This isn't quite right, since population hasn't stayed constant over the last 20 years, but it should be pretty close.

If you want to know what the incidence is in a particular county, you can look it up in lyme_risk_by_county.csv.

Code is on github.

←
What Do You Do Where? Pro-drop English
→