Insurance companies are prediction businesses. They want to know how likely each person is to cost them money and how much so they can figure out what to charge. [1] For example, the chance that you will crash your car varies by age: 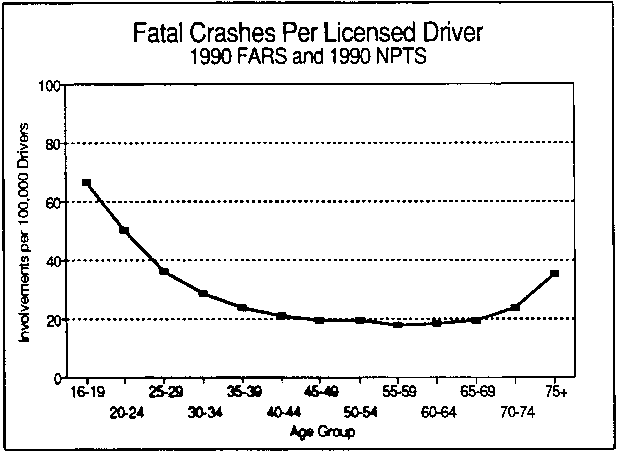 Source: Analysis of accident rates by age, gender, and time of day based on the 1990 nationwide personal transportation survey

A 16-19 year-old is three times more likely to crash than a 40-69 year-old, so they pay roughly three times as much for auto insurance. Male drivers crash more, especially young ones, and rates reflect this too. Many other factors might also give information about how likely you are to cost them money: yearly miles driven, years of driving experience, average speeds, average acceleration, night/day driving, marital status, field of work, number of children, model of car, color of car, etc. Auto insurance companies would love to collect all this and more to figure out exactly the right amount to be charging you.

The idea that safer drivers should pay less is pretty uncontroversial, but an image was recently going around on Facebook showing how we think of health insurance differently: 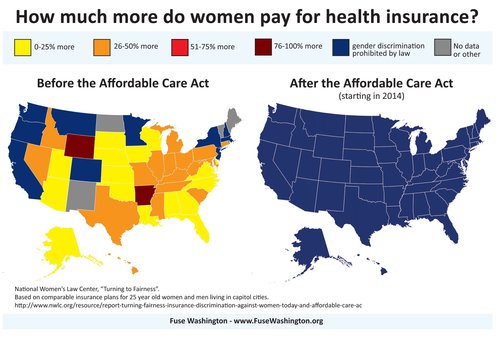 The implication is that insurance companies are charging women more for health insurance as simple discrimination. But health care costs are higher for women, on average, just as car accidents are more frequent for men, on average. Health insurance is weird because we have the idea that people should not be charged in proportion to their risk.

While the Affordable Care Act prohibits using gender to determine pricing, it doesn't entirely fix this because of high deductible plans. A healthy, young, male, or otherwise lower risk person can choose cheaper coverage that only kicks in after they have paid some large amount out of pocket. Because they are less likely to hit their deductible, they end up paying less than higher risk people on average.

I think there are really only two good spots on this continuum: mandatory single-cost health care and insurance with premiums proportional to risk. With the former we model it off primary education and decide that it shouldn't be more expensive depending on your needs and risks. With the latter we model it off food, where people who need more pay more and people who need less pay less. Anywhere in between and we have ugly hacks where some facts about you can go into risk calculation and pricing while others are illegal for insurance companies to consider.


[1] You don't have to do it this way, but if you don't account for the different riskiness of different groups properly then adverse selection makes it so you attract the riskier people while the less risky ones switch to insurance companies that can be selective and offer cheaper insurance to qualifying applicants by more carefully evaluating risk.