The immersion blender is one of my favorite cooking implements, but it's also pretty dangerous. In a regular blender or a food processor the blades only spin when safely enclosed in plastic, which makes it much harder to hurt yourself. In an immersion blender the blades are exposed from the bottom, and this safety isn't possible. I know several people who've been hurt by accidentally turning them on, and in each case it's been:

There's been some writing about this, and the general advice to avoid this is to unplug the blender before clearing the blade. Which works, but is annoying enough that people don't consistently do it. On the other hand, most consumer ones come apart into two pieces for cleaning. There's the motor end, and the blade end: 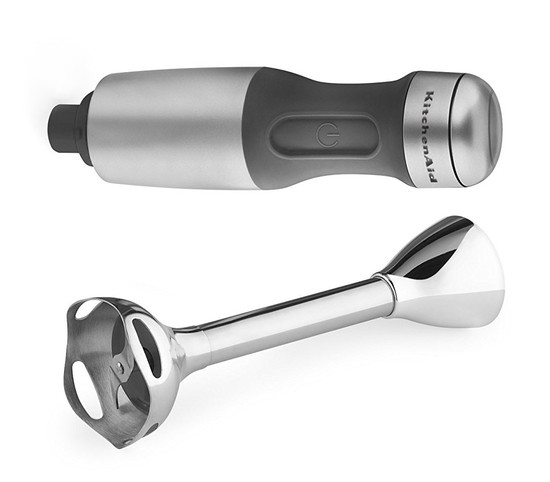 If you take them apart, there's no way for a slip of your hand to pass power through to the blades. So here's a useful rule: always keep the parts separated unless the blade is in something you want to blend.

Following this rule, the scenario above would become:

You can still cut yourself on the sharp blades if you slip, and cleaning it another way so you don't put your fingers in it is still better, but the blade isn't going to spin under power with fingers inside.

(Some new immersion blenders have a safety lock, but these are very unpopular among reviewers. They they make it hard to impossible to use the blender with one hand, and if you're using both hands on the blender you don't have a way to hold the bowl or cup.)