A few days ago I looked at the gender composition of BIDA dances and saw that about 41% of the people playing for our dances were women. I wanted to see how things were different at the dance weekend level, so I looked at my spreadsheet of dance weekend bookings and made a list of "dance weekend bands". [1] 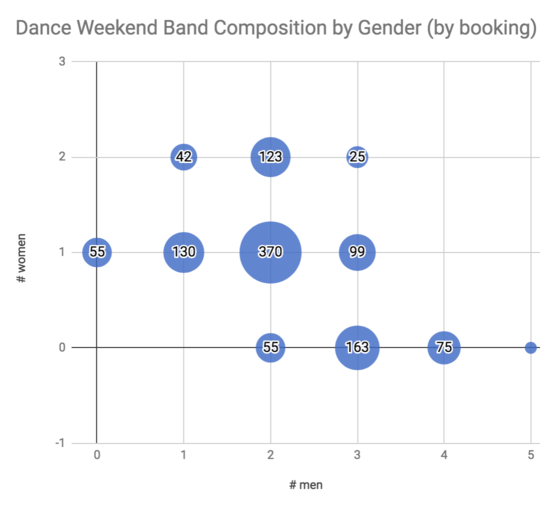 We can also look at things on a per-band basis: [3] 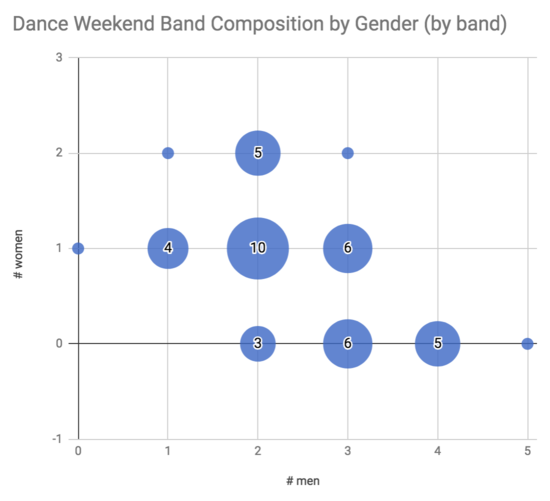 [1] I defined this as any band that played at least four dance weekends in 2014-2017, only counting years in which the band had at least two weekend bookings.

[2] As before, I counted gender by name, checked websites for appearance when it wasn't clear, and checked band bios for pronouns when it still wasn't clear. If I've gotten someone wrong I'm sorry and I'd be happy to fix it if you let me know! Band composition varies, and sometimes groups add extra musicians for weekends, but I've gone by the band websites. The weekend websites would be more accurate, but that would be a lot more work and would involve a lot of looking things up in the Wayback Machine.

[3] I'd like to do a per-musician analysis, but I'd need to convert band names to musician names, and that's again a lot of work.