Julia gave me a hat for christmas. It looks something like: 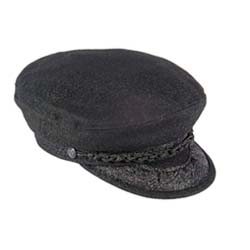 I used to wear a hat like this when I was little, 3rd grade through 5th grade or so. I like it.

When I was younger, though, I had no concern for whether I was being rude by keeping the hat on all the time. I would keep it on in school and even in church, which I now understand is quite rude. I did not grow up seeing people putting their hats on and off all the time, so the right way to deal with it is not automatic for me. I've been reading some websites, but they all seem to be summarizing rules that have not been in common use for decades. They say things like "the hat should not be removed at a lunch counter" but do not address supermarkets. Many things have changed in those decades. So, left without a modern etiquitte guide, I have some questions:

I'm sure I'll have more questions later. Likely these things will be second nature in a bit.
←
The Minimum Requirements For Contra Dance Music and Musings on 10/8 Meter Lillibullero rhythm
→