At LEAF [1] I learned a new cooperative card game, Hanabi. In general, I don't like cooperative games (like Pandemic) because they tend to turn into the one or two best players telling everyone else what to do for the whole game. Hanabi solves this by restricting information, so each player has their own part of the puzzle, and everyone has to think for themself.

Each player has a hand of cards that faces outward, so everyone can see their hand but them. There's a restricted language for communicating with each other: you can tell someone which of their cards are of a given suit, or which cards are of a given rank. Like "this, this, and this are 3s". From this people figure out which of their cards to play, and the goal is to get 25 points by playing one of each of the cards. According to the person who taught me people rarely win outright, and instead generally you just try to get the highest score you can.

When we played we used the game language as it was intended, without any conventions, but it got me wondering what a professional team would do. How far in the direction of Bridge bidding would it go? For example, you could say "your 2s are ..." to mean "play the second card in your hand". The main complication is that you aren't allowed to say "you don't have any 2s"; if they don't have any of something you can't bring it up. Still, because we can use both color and number to tell them about cards this seems like it could go a long way.

I coded up a simple simulation of a two player game where the convention is basically: 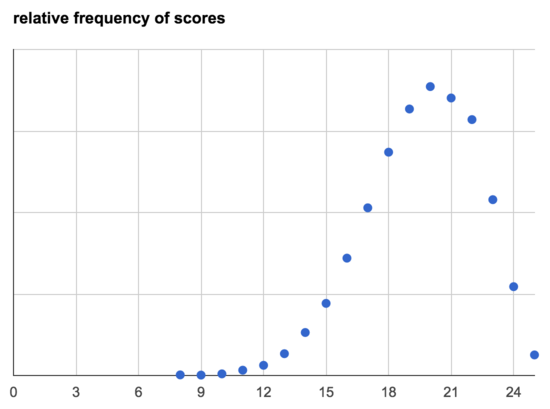 This isn't a great score, but there's lots of room to improve this convention:

The code is on github; if anyone has convention ideas that are easy 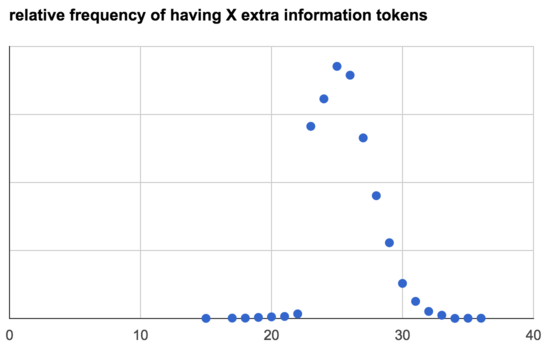