Harris recently laser-cut some tokens for walking through contra dances (presumably in preparation for calling BIDA this Sunday) and remarked that they looked like game pieces: 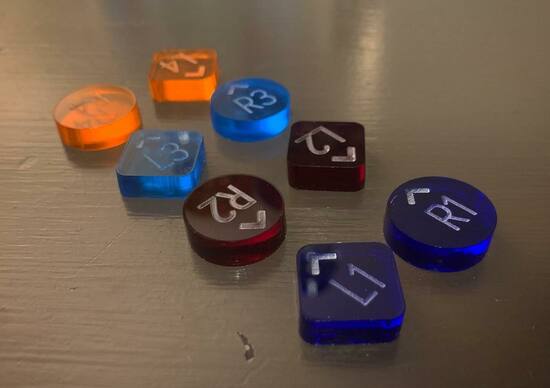 At dinner we talked some about trying to make this into a proper game, and made a bit of progress but didn't get to a full game. Here's an attempt at fleshing it out.

Each player has a hand of "calls" which they use to manipulate the contra dance line. The players are cooperating to move the dancers from:

in eight calls. One player, however, is randomly selected to be a secret traitor, and wins if the game fails, but not if people correctly guess that they were the traitor.

The first four are rotations of 0, 1/4, 1/2, and 3/4. The second four are mirrors along the four axes. The last is not much of a contra dance call, but I can't think of a better one (twirl to swap is much less than eight counts).

After eight cards have been played, if the intended formation was achieved the good guys win. If it wasn't, there's discussion of who to accuse as the traitor, and then everyone simultaneously votes for someone by pointing. The traitor needs to be picked by a plurality vote for the good guys to win.

Unrestricted table talk is allowed, but showing your cards is not. With perfect play the good guys should always be able to plan out a win, but for real people that's just going to be much too hard: there are too many permutations and options to keep in your head.

I think you can balance the game by changing the hand size. Smaller hands favor the traitor (harder to win, easier to claim you didn't have any better options). I'd guess three cards is about right, so you would only have a 3/8 chance of winning by chance on the last turn? You could auto-balance by having the hand size increase by one after two sequential traitor wins, and decrease by one after two sequential good guys wins.

I'm thinking the deck should have eight of each card, but I'm not sure.

I think you probably want 3-5 players?

You could extend the game by adding a ninth call:

This card is unusual for two reasons. First, if it's the 1st, 3rd, 5th, or 7th card played it counts as two cards. Second, it acts as Long Lines (do nothing) if the board looks like, ignoring numbers:

but as Dosido (horizontal mirror) if the board looks like:

It's not clear to me whether this makes the game too complex, but the Swing is an important enough contra dance figure that it would be sad to leave it out.

Here are some mock cards: 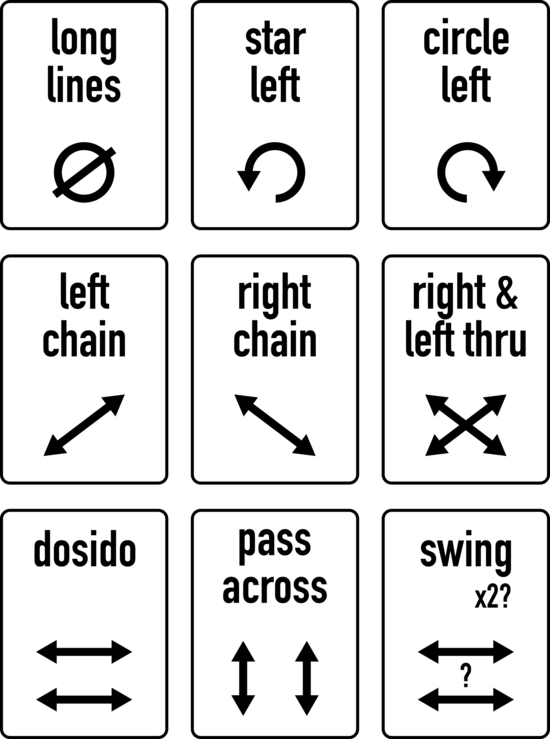 I'm hosting a board games party this Saturday (10:30 until whenever)—if I can get a group together I'll try playtesting it there. Let me know if you'd like to come!


[1] In addition to the starting position there are three rotation:

and every position has a corresponding mirror position:

aren't possible in a simple dance and I'll ignore them here.