Quiddler is a card game, a cross between rummy and scrabble. I've been playing it on vacation with in-laws, and it suffers from the common drawback of games where your turn begins with drawing and ends with discarding: you begin your turn with new information, and so have to do a lot of thinking while everyone waits for you. This is something more recent games have fixed and we can make the same fix to Quiddler, rotating the steps.

You each have your own personal discard pile to your right: 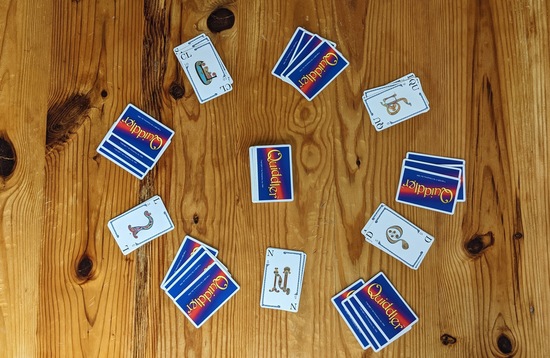 The reason we need personal discard piles is that if you keep having a common one then drawing from it is nearly useless: the card on top will always be the one you just decided to dump. You could instead have the option to pick up the card the player before you discarded, which sort of fixes this, but then there's still important information you receive just as your turn starts. Best is to have the option to pick up the card discarded by the player who goes after you: that's the one that's been sitting out for the longest. Each player has their own discard pile to their right, and when you want to pick up a face-up card you draw from the discard pile to your left.

The other change we need to make is that at the beginning of each hand everyone choses between drawing a face up card or one from the draw pile. This step can be simultaneous. You could instead deal an extra card to everyone to begin, but getting a little bit of choice about what your initial hand contains reduces the chances of horrible (no vowels or all vowels) hands.