This morning I posted Concerns with Intentional Insights to the EA Forum. It represents the work of a lot of people, and I wanted to give some details on how it was created.

Two months ago I wrote a post, Conversation with Gleb of Intentional Insights, which started a large (500+ comment) conversation. While my post focused on a single interaction with him, in the discussion people brought up many other potential instances of dubious behavior. Effectively, we were crowdsourcing what became today's forum post. Gleb participated in the discussion, demonstrating why some concerns were erroneous but also further demonstrating the qualities I'm worried about.

Recognizing that a comment thread, especially one with a big mix of topics, is not a good venue for communicating concerns to busy people, I started to collect the evidence from the thread into a document. Other people helped, some anonymous, some listed at the end of the Concerns doc, and by the end of August it was nearly complete.

Getting it the last of the way from "nearly complete" to "complete", however, took a really long time, as it turns out EAs can be perfectionists. Plus everyone working on this doc was doing it in their spare time. At this point I'd kind of lost interest, so Carl and Gregory were doing most of the work.

I had initially hoped to create both a listing of concerns and an "open letter" that summarized the problem and recommended a course of action to the community, but we weren't able to agree on what that should be. Instead we decided we would just post the evidence doc to the EA forum, and let the community go from there.

On September 16, Carl sent the draft of the evidence doc to Gleb for comments. Gleb had several, and we updated the doc based on his concerns where we thought that was warranted. On October 15, I converted the doc to HTML to paste into the EA forum. This included collecting the images and mass-resizing them (but they're all links to their original full size) and converting the formatting to html, which was mostly a manual process. It is possible to get HTML out of docs, but it produces really messy code that and I didn't think would play well with the EA forum.

After this Carl had a bit more to add, which I ported over to the HTML doc, and then we sent the draft to Gleb for a final round of comments. Gleb was traveling and unable to comment until the 22nd, at which point Carl updated the doc in response.

Here's what the ~2000 edits on the doc look like, with days-since-start on the x-axis: 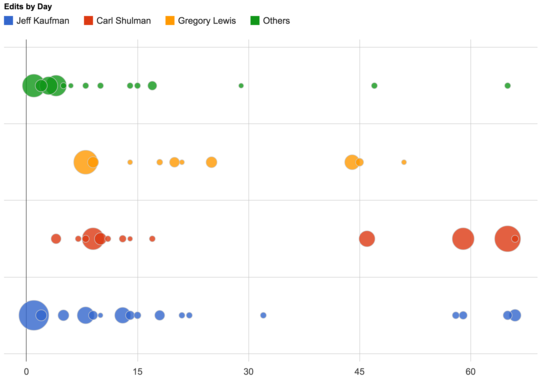